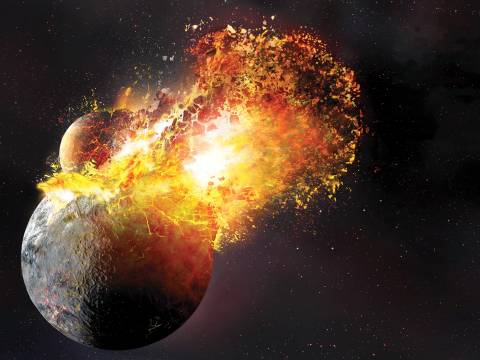 Strange deviation orbits of the moon from the equator explained by the strong impact and the abrupt fluctuations in its movement.

Orbits of almost all Solar system planets lie in the Ecliptic plane, where the equator of the Sun. This pattern is logical, because the Sun and its planets were formed from the total of the protoplanetary cloud rotates in a certain direction. Significant deviation (about 7°) demonstrates is that mercury, the tiny and located beneath the side of the star. However, particularly strange is the Moon’s orbit which is inclined from the plane of the Ecliptic by as much as 5°. Another oddity of our natural satellite can be called the diameter of its orbit, exceptionally large for a planet of earth size and satellite size of the moon.

Today it is considered that it appeared in the result of collision of the young Earth with an unknown celestial body size almost with Mars – the hypothetical Theia. The impact raised a huge amount of material, some of which appeared in earth orbit, and gradually formed a ring, and then companion who gradually migrated further and further from the planet. Recent studies cast serious clarify this hypothesis.

For example, it was found that the isotopic composition of the Earth and moon are virtually identical, although the initial scenarios, it was assumed that it was formed mainly from the material theis and must be different from the world. Now it is assumed that the blow was incredibly strong and not only caused an almost complete evaporation of the substance theis, but melt the entire mantle of the Earth, to thoroughly mix both. The clash quickly turned around a planet, which began to make the turn around the axis for 2-3 hours and only gradually, as a result of the stabilizing gravitational influence of the Sun and moon appeared to have slowed to its current 24 hours.

However, all this does not explain noticeable deviations of the satellite’s orbit from the Ecliptic. The ring is the ejected material and, subsequently, the satellite was to obtain the same rotation as the Earth, and then do something to correct it. A new explanation for this puzzle is suggested Sarah Stewart (Sarah Stewart) at the University of Maryland and her colleagues, which publishes the journal Nature. “That is especially good in this new model is the fact that it gives us the correct characteristics of the moon, and composition, and orbit, just one step, says Stewart. – We don’t need a complicated series of coincidences to get your options”.

In the scenario describe Stewart and her co-authors, the impact theis spins and melts the Ground is extremely strong. Under the action of centrifugal force, the planet literally flattened, becoming in the plane of the equator almost twice more than in the plane of the poles. In this case the axis of its rotation dramatically shifted, leaning to the Ecliptic plane at 60-80° instead of 23.5°. Meanwhile, thrown into the orbit of debris and dust, it formed the Moon’s orbit which lies in this new tilted plane of earth’s orbit.

However, migrating farther from the planet, the satellite is in position, when the gravity of the Sun affects its movement is stronger than the attraction of the Earth. The planet’s rotation and the satellite slows down, earth’s axis is returned closer to its original position and acquires a current deviation from the Ecliptic. The plane of the lunar orbit is in the visible angle is 30°, however, feeling the influence of the Sun and the Earth, it varies decreasing sharp and irregular, gradually coming once again in line with the Equatorial plane of the Earth. To date, the deviation was reduced to 5°, and, if Stewart and her colleagues are right, this figure will decrease in the future.