Earth can become a giant spacecraft 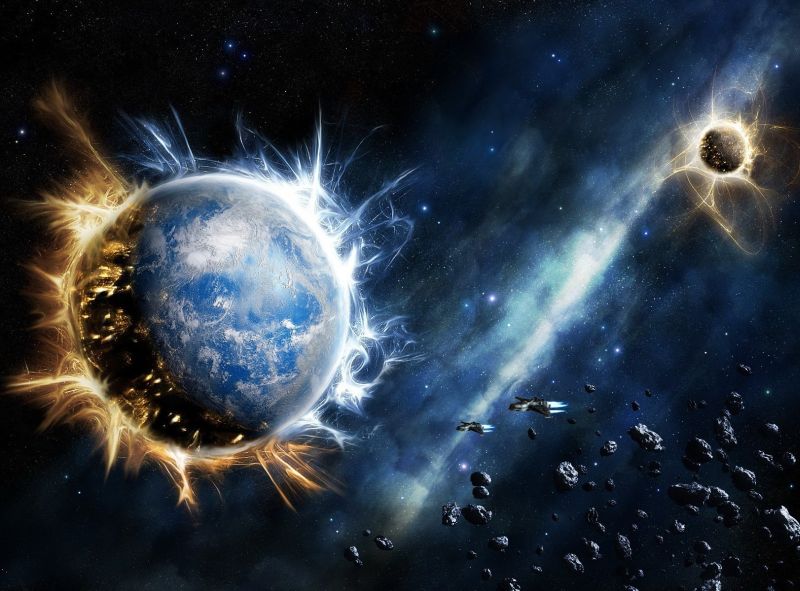 For the history of its development, barely half a century old, futurology has learned to set and successfully solve incredibly complex, and in its content – fantastic tasks.

If some 10-15 years ago, modern oracles had to think about the fate of the planet for tens and hundreds of years, now the question is about the fate of the earthly civilization for the “next” thousands and millions of years. On such a scale it becomes obvious that humanity is inseparable from the Cosmos and its fate depends both on the future Universe and on the incessant travel of the Solar System on spirals of the Galaxy for a second.

Today, cosmologists talk about the so-called space-time foam, from which many universes are born, and our native universe is a tiny “bubble” in this foam. But since universes are born, they must die. Our universe will one day begin to “resolve” in a vacuum, when even elementary particles are destroyed. In the universe there will be practically nothing left. The cosmos will become one giant “vacuum hole” – the sea of ​​Dirac. So, before this time, the earthly civilization has to find that vehicle that will allow it to reach another universe via vacuum-virtual seas. This is our long-term strategic task, and the time to solve it, more than enough – almost a whole eternity. But now it is time to think about closer – operational, tasks.

As calculated by astronomers, in one year the Earth, along with the solar system, is flying in the Galaxy 7884 billion km. Our Milky Way Galaxy revolves around the center of the supercluster of galaxies (the center of the universe), whose diameter is 300 million parsec (1 parsec – 3.26 light years, or 31 billion km).

Sooner or later the Milky Way will enter the stage of collapse and a black hole. To cherish the hope that after the death of the Galaxy some information about the glorious history of intelligent civilization on the planet Earth will remain, at least, silly.

In addition to a regular event, the death of the Galaxy, humanity awaits other cosmic cataclysms – global glaciations while traveling through the spiral of the Galaxy, which is associated with a change in the polarity and inclination of the Earth’s rotation axis.

In 500 million years (and maybe much earlier) on the Sun, the most complex evolutionary processes will begin to transform our star into a star of the “red giant” class. By this time, the existence of organic life on our planet will become impossible. Over the next three billion years, the Earth will warm up and become a living hell. After 6 billion years, as already mentioned, it will be absorbed by the Sun that swells up to unimaginable dimensions.

A lot of worries will be created by our big and formidable neighbor – Jupiter. The mass of Jupiter is 11 times larger than the Earth, and the rotation speed around the axis is 20 times more. The magnetic field is 70 times stronger than the Earth’s magnetic field. Jupiter can turn into a star, and it is unlikely that the conditions of life on Earth will be better from this. Most likely they will be fatal to earthlings.

Of all these pessimistic conclusions, I would like to have an optimistic solution. Man is a very interesting creature. He does not know at times what will happen tomorrow, but he is worried about the fate of civilization in an insanely distant future. So, the founder of astronautics Konstantin Tsiolkovsky at the end of the XIX century dreamed of flying to other planets. Today the projects of man’s flight to Mars have been created, automatic spacecraft have circled almost all the planets of the Solar system.

But in the near future, the flight and life of a person on another planet seem unreal. Firstly, it is unlikely that there is a planet in the Galaxy where conditions of life will be suitable for people from the planet Earth. And it is also impossible to live and successfully develop civilization in spacesuits. But even if the geophysical conditions are suitable, then aggressive alien microorganisms will meet the aliens hostile, a person will not be able to survive and develop under the new conditions.

There is only one way out – to fly to a new star, using your own planet as an intergalactic vehicle. While it looks like an unrealizable fantasy, but this project is of great importance for our daily life, as it inspires that optimism, without which a person ceases to be a man.

The solar system moves in the Milky Way galaxy along a helical spiral. If you leave the spiral trajectory and accurately calculate the trajectory of flight, you can, on a relatively straight line, within a relatively short time (800-1000 years), fly to the nearest galaxy in the blossoming stage and continue the development of civilization in the young star.

As our contemporary, a professor at the Moscow Power Engineering Institute (Technical University), Doctor of Technical Sciences Igor Kopylov, believes, such a flight to a new star is a very real project, and its implementation is 2,000 years, which by space standards is a mere trifle. If we analyze everything that humanity has done in the twentieth century, then it is easy to see that for 200 centuries it is quite possible to solve technical and social problems of any complexity.

Fundamentally the technical difficulties of the “Great Flight” are completely solved, but the most difficult problems will arise, oddly enough, at the initial stage, when a decision is made to start the project. It is necessary to determine the number of people that can be provided with food and heat, as well as solve many other problems, for example, whether to take the moon with you.

The most natural question: where to get the energy necessary for such a “great space travel”? Due to what will it be possible to move the Earth from the violent galactic orbit in the right direction? The answers are given by the concept of geoelectromechanics, which views our planet, the solar system, the Milky Way and the whole universe as interconnected electromechanical systems.

According to this concept, our planet is an electric motor, the rotor of which is the liquid part of magma, and the stator is the core of the Earth. The energy of cosmic particles (electrically conducting plasma) passing through the planet’s magnetic field is transformed into electrical energy of the radiation belts and currents of the Earth’s core. In fact, a giant magnetohydrodynamic generator (MHD generator) operates. Thus, the Earth is “woven” into the energy structure of the Cosmos. You just need to learn how to use these processes. And such fundamental decisions already exist.

The fact is that the management of the spacecraft “Planet Earth” practically does not differ from the way the space vehicle controls the gyrodins. The energy for controlling the gyrodyne of the planet Earth can be obtained by using the energy that is now consumed in typhoons, tornadoes, cyclones and anticyclones. The average cyclone activity is 1010 kW; The power of typhoons is an order of magnitude higher. In the transient processes in this electric machine, the energy involved in the formation of cyclones and anticyclones equals the energy of several atomic bombs.

As for the trajectory of the “Great Flight”, it can be calculated in such a way as to fly “transplanted” from one star to another, constantly feeding the planet with energy from other stars.

His version of the great space travel was offered by the Swiss physicist Mieczyslaw Taube. According to his project, around the equator should be placed 240 towers 20 km high, on top of which will be placed thermonuclear jet engines. At the moment when the axes of the engines are directed to the center of the solar disk and coincide with the intended trajectory of removal from the Sun, the engines will turn on, and the reactive force will begin to push the planet away from the luminary. The calculations show that each engine should develop a power of 8.3 * 1017 W. Over one billion years of continuous engine operation, the Earth can reach orbits at least 5 star-studded stars and become their companion.

As we can see, the problems of the long development of civilization are being solved today, and this conclusion is far from being a crazy fantasy. The future of terrestrial civilization is in the hands of the generations of the 21st century. And what our more distant descendants will be capable of, today even the science fiction can not even imagine in detail.