Hillary Clinton will reveal information about contacts with aliens? 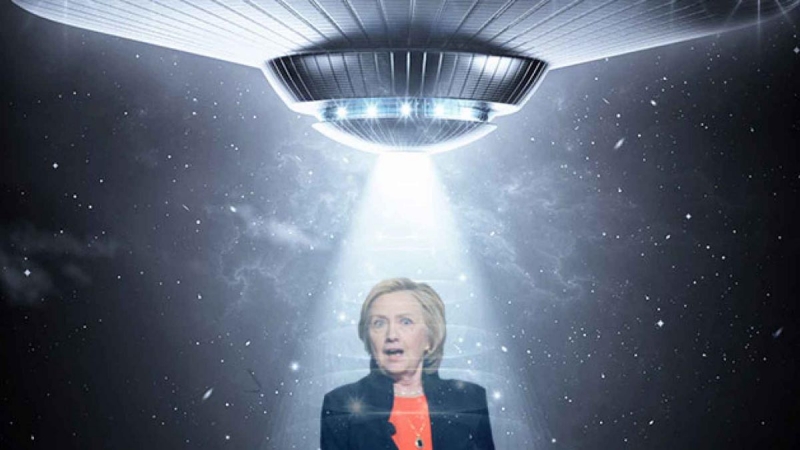 If Hillary Clinton wins the presidential race, she will become not only the first woman, who stood at the head of the United States, but also the first President whose election campaign touched on the subject of UFOs.

Not so long ago, she appeared on the Jimmy Kimmel show, in the release relating to UFOlogy. Leading Clinton recalled that her husband bill during his presidency, has tried to get information on UFOs, but it didn’t work out. “Well, I’ll try again,” retorted Hillary. In an interview with the Conway Daily Sun newspaper, she said that “go to end” in the quest to uncover information about contacts with aliens, and it was very impressed by some ufologists and enthusiasts.

However many experts that devoted to the subject of UFOs than one year of studies are less optimistic.

“It is unlikely that she will be able to find something,” said Nick Pope, author and journalist who covered the UFO questions by request of the British Ministry of defence. The Pope led the project of the government of great Britain for the study of UFOs between 1991 and 1994. As he notes, the U.S. research work in this direction (project “Blue book”) was completed in 1969, and no new data since the authorities showed up.

Campaign Manager Hillary was John Podesta, who headed the fan club “X-Files”, working in the 1990s in the White house under the leadership of bill Clinton. In the Preface to one of his books about UFOs Podesta wrote, “it is time to raise the curtain of secrecy” in matters concerning contact with aliens.

Until February of last year, Podesta was an adviser to Barack Obama. Leaving the White house, John lamented that no new data about UFOs and was not made public. “And finally, my main failure of 2014: the materials about aliens and not disclosed,” — he wrote on Twitter.

However, Nick Pope does not understand the annoyance of John valley podestà. “There is no classified materials about UFOs, which someone needs to disclose. With the end of project Blue book in the United States there is no office, investigating episodes of UFO. And all information from the “Blue book” has long made public and available in the national archives,” says the Pope.

With the Pope does not agree Ted ROE Executive Director National aviation reporting center on anomalous phenomena (Narcap). It is an independent organization that collects reports from pilots and radar operators relating to UFOs. Rowe is convinced that the government knows more than it says.

In support of its position, Rowe recalls, as a journalist Leslie Kean has done the government a formal request in relation to a known incident in Pennsylvania. Faced with the refusal of state bodies, kin went to court and won, but no materials and have not received — the government has declared the documents are lost.

“They say they lost all the files. Perhaps these “lost files” more than we think,” says Rowe.

Skeptics questioned not only the existence of “classified materials”, but also the appropriateness of the investigation of Clinton.

“I’ll never know why it is necessary. I don’t think so can get extra votes in the elections. Hillary Clinton makes an excellent gift Trump. Eccentric, Republican can now say: “I support the creation of jobs and the modernisation of the economy, and my opponent, it seems, only keen on UFO and aliens,” says Nick Pope.

The buzz surrounding the statements Hillary Clinton swept the country — even the press Secretary of Barack Obama had to answer questions about the mysterious Area 51. Josh earnest said he was unaware of the plans of the President to publicize information concerning this object.

Area 51 is discussed by ufologists almost more often than UFOs. Enthusiasts are convinced that this secret base is stored the wreckage of the alien ship and even their remains. But Nick Pope is always ready to pour romantics “cold shower”:

“I wish there were alien bodies. The world would be much more interesting if in the hangar of Area 51 was standing by an alien spacecraft. But in our century, in the era of Wikileaks, assange and snowdens, it is unlikely that the state would be able to hide in the bag such a big awl”.

Ted Rowe, over the past 16 years who has studied thousands of reports of UFOs, do not believe that “x-files” will be released in the coming years. In his opinion, promised an investigation, Clinton is doomed to failure.

“I don’t know what the President’s level of access to classified information. Perhaps Hillary Clinton at all desire will never know that she is not supposed to,” said Mr. Rowe.