How to behave if the aliens come contact with you 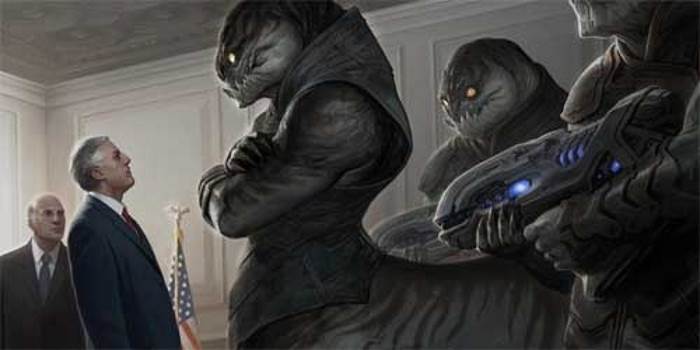 If extraterrestrial intelligence has shown interest in your person and made contact – don’t panic, it is better to determine the type of aliens with whom you have to deal and behave with them accordingly.

If the aliens belong to aggressive types – in no case do not go into a dialogue with them mentally and resist any attempt to establish communication with you. Let them know that contact with them you do not intend to. With positive-minded to mankind civilizations you can try to engage in dialogue and learn a lot.

At the moment there are several of UFOlogy’s most well-known types of aliens:

1. Insectoids – a primitive group of aliens, people are interested in them as a species and as a carrier of extraterrestrial intelligence. Are set up to people very hostile, often conduct experiments on them. As a rule, are in the Grey “running errands”. For this reason contact is not recommended.

2. Gray (Grays) is divided into three subspecies: Zeta Reticuli, undersized grey, high grey. They all belong to the aggressive group of aliens. As a rule, come in contact without the consent of the interlocutor. By any means give up contact with the representatives of this race.

3. Extraterrestrial biological entities – as well as with Gray it is not necessary to enter into negotiations. To the person hostile.

4. The reptilians – a very aggressive civilization of aliens. People hate all his reptilian soul (which they, incidentally, is not), which is one of the reasons for the hatred of the earthlings. Contact with this race of aliens has never nothing good for a man not over. The most harmless consequence of the contact of a serious deterioration in health. In addition, they are carnivorous, so you can easily use in human food.

5. Space dwarfs – according to ufologists, these beings are collecting information about the Earth itself. People are interested in them solely as a species, inhabited on the planet. In case of contact to act according to circumstances, but to observe extreme caution.

6. Men in black – no, it’s not the main characters of the acclaimed blockbuster, but a real kind of space aliens. A sort of intergalactic lovers of the exotic, which is for them and our planet. Like the previous view collect information about the Land, people they are not particularly interesting. In General, type safe, if not pay attention to their style of communication, which is a prison slang: “in-kind”, “type”, “short”, etc. Must think the “lads” from the 90s still use the Terran authority.

7. Nords – they are “Nordic beauties” and “Scandinavians”. This can be attributed to the inhabitants of the Pleiades, Sirius, Asturiana and Leniency. Refer to the representatives of the higher civilizations, the people are welcoming. It is believed that one of their purposes at the moment is to protect humans from aggressive aliens. You can safely go on contact.

8. Humanoid blood-sucking – as the name implies, this structure is extremely aggressive to people. You should stop any contacts.

9. Trubchatogo – similar to the previous type.

10. Pointy-eared – to an extreme degree aggressive and violent against humans. Eliminate any possibility of contact with representatives of this race.

11. Bio androids – robots that are involved in research activities. In General, communication with them safely, if careful.

12. Chupacabra – has no mind and is the result of an alien experiment. On the Ground, probably abandoned for the same purpose. The sight of this creature – Lam.