Humanity is controlled by alien reptiles

Is mankind ruled by alien reptiles disguised as humans? World leaders and pop stars hide scaly skin and vertical pupils? What nonsense! Nevertheless, on the Internet, many take such statements seriously. Further on how to recognize the reptiloid under cover.

Along the street is a full-fledged young man in a gray T-shirt and large jeans. He walks a dog. It would seem that there is unusual? But if you look closely, you can notice that his legs are bent when walking unnaturally – forward.

A certain Mr Patriarch wrote on Twitter: “Zuckerberg’s legs bend forward, not back. The reptilians were mistaken when they collected it. ” 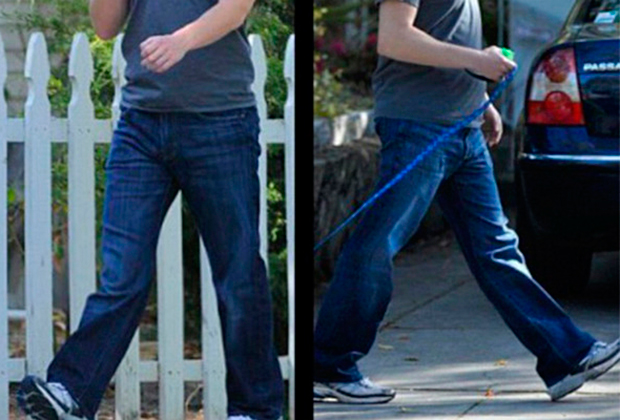 The billionaire founder of Facebook has been suspected more than once of being associated with alien lizards who secretly rule the Earth, and that he himself belongs to this extraterrestrial race. During a videoconference he held with Facebook users in June 2016, he was asked in the forehead: Is he a reptilian disguised as a man?

“I will answer this question” no “,” said Zuckerberg. And after a pause he added, licking his lips: “I’m not a lizard”. Naming the topic stupid, he turned to the answers to other questions, but the audience noticed: speaking of reptilians, Zuckerberg was clearly nervous.

The founder of Facebook is not the only celebrity who is suspected of having links with the lizards. Belief in reptilians is not even a conspiracy theory, it is rather a special view of the world, according to which a mysterious ancient race rules mankind for millennia.

Sociological surveys show that about four percent of the US population believes in this. Although, of course, to find out how seriously people answered the question “do you believe in reptilians?”, It is impossible.

Why are reptiloids so difficult to detect? The fact is that with the help of high-frequency vibrations they create holograms that mask their appearance in a way that can not be distinguished from a person.

The forefathers of the ancient pangolin can explain all the woes of mankind. They are accused of everything – from the organization of attacks on the twin towers in New York before the emergence of the phenomenon of homosexuality.

For example, ufologist James Bartley has been investigating cases of kidnapping people by reptilians for twenty years. And yes, he is sure that with the help of his extraordinary abilities, the alien-lizards can influence the sexual preferences of a person and even turn him into a pedophile.

The adepts of the cult of reptilians usually believe that Masons and Illuminati are secret organizations of the lizards, through which they infiltrated the highest echelons of human power. Now reptilians control all the most important social institutions of the world, disguised as kings, queens, famous politicians and other celebrities. 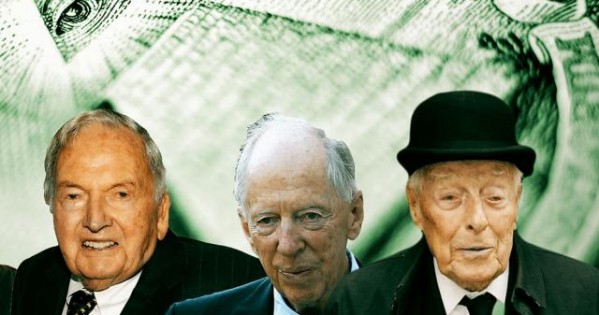 Not only Mark Zuckerberg was urged to confess that he is a reptilian. In 2011, comedian Louis X Cay during his show several times addressed the same question to former US Defense Secretary Donald Rumsfield, and he stubbornly refused to answer it.

Three years later, the Prime Minister of New Zealand, John Kay had to explain the same topic, because one vigilant citizen formalized an official request to this effect under the Freedom of Information Act.

“As far as I know, I’m not a reptilian,” Kay replied. – Faced with this request, I made an unusual step for myself: I visited not only the doctor, but also the veterinarian, and both confirmed that I was not a lizard. I never flew on a spaceship, I was not in space, and my language is not very long. ”

Aliens who take the form of animals and humans are known in science fiction at least since the 1920s, and in mythology such an image is not uncommon. In addition, US citizens often claim meetings with man-eaters.

But when these mythical beings became interested in ufologists? Most likely, it happened in 1967, after the Canadian David Siouault said that five months ago temporarily lost his memory on the way to a friend, and then the events of that day returned to him in a nightmare.

According to him, he was hypnotized, raised on a flying saucer with the help of an orange beam and placed there on a table surrounded by computers. Some aliens, like crocodiles, took off his clothes and … What happened next, he could not describe, because it was too scary. 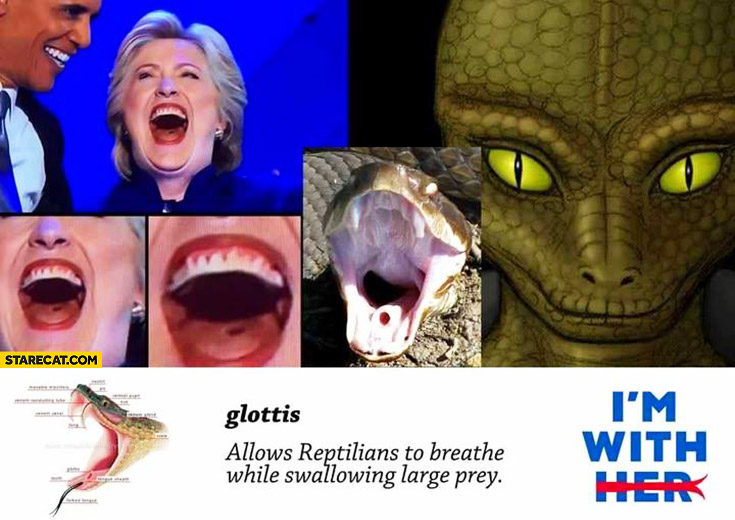 Hillary Clinton is also recognized as a reptilian

There were other victims of kidnapping of reptilians. For example, in 1978, an Italian told about this. However, more often still people in those days were abducted by “gray men” or tall skinny newcomers.

Everything changed when the book “The Greatest Secret” by David Hayk, a former football player, sports commentator, and now a messiah, was opened in 1999, called upon to open to humanity the eyes of the terrible and mysterious world in which we exist.

He combined together ufology, conspiracy theories, legends about ancient astronauts and alternative history into a single frightening narrative, the key role in which the secret rulers of humanity play, zombie him and subordinate his will.

This is the Order of the Illuminati, based, according to Hayk, precisely capable of changing their appearance by reptilians, newcomers from a different dimension. By the way, people prefer to eat human flesh. And in general, people created this very race of the Anunnaki lizards.

Ike was the first to announce that Queen Elizabeth II of Great Britain is not a man.

“I saw how she sacrificed people, eats their flesh and drinks their blood. When she reincarnates, her face becomes long, snake-like and pale, “he wrote.

And the queen is not the only reptiloid of royal blood. According to Hayk, the whole august name is non-humans.

Of course, social networks enthusiastically began to discuss which of the powerful of this world secretly from the public wears scaly skin and hides in the mouth a bifurcated language. In reptiloids recorded almost all celebrities, from politicians to pop stars – after all, they are fooling the entire population of the Earth. 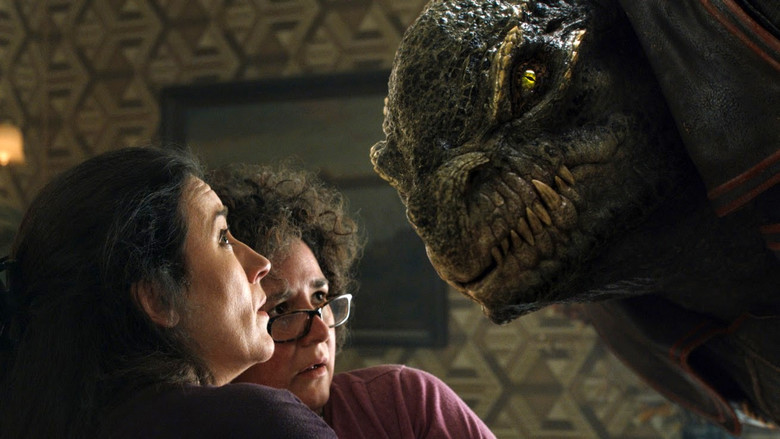 On the Internet, the theory of conspiracy of reptilians was widely spread. Of course, most often it’s just such an ironic trolling. However, there are a lot of mentally unstable citizens for whom extraterrestrial lizards are very real, and their products are full of YouTube – just look at the number of videos at reptilian’s request.

Why are there so many? Maybe the Internet contributes to the development of mental illnesses? As the psychologist Rob Brotherton, author of “Suspicious Mind” explains, in an interview with Motherboard, all people are somehow inclined to believe in at least one conspiracy theory.

And the Internet made especially active paranoics visible, providing them with a platform for presenting their thoughts in real time. In fact, if before conspiracy needed to at least write and issue a book, now it is enough to collect a grateful audience in your blog and feed it with small posts or videos. 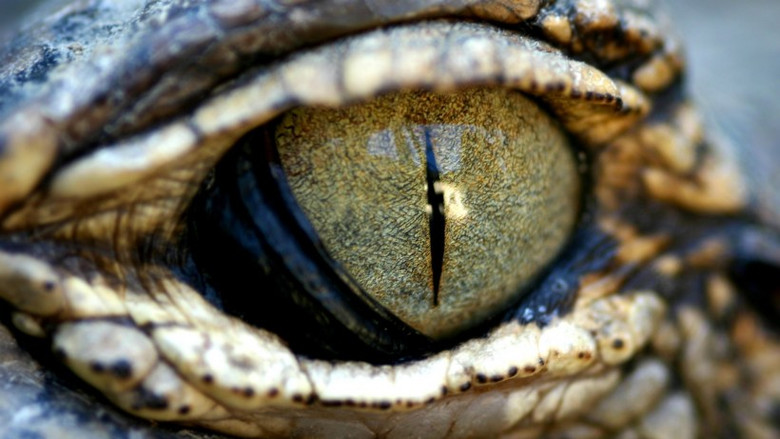 How to recognize a reptiloid

Potential reptiloid conspiracy is recognized by certain distinctive features. So, usually they are white people with piercing eyes and eyes of green or blue color (although the lizards are able to change their shade). Reptiloid has low blood pressure, and the body can have scars of inexplicable origin.

Since the Annunaki disguise themselves as people, one should look closely at the behavior of the suspects. Reptiloids and half-bloods usually do not show empathy, are incapable of love, are very intelligent and addicted to science and the cosmos.

In addition, it is worthwhile to study the video of a person who is suspected of being a lizard: sometimes in some rollers disguise does not work, and you can see vertical pupils or scaly skin.

Comments under these videos are a separate topic. Seeing another “revelation”, vigilant users of the video service are genuinely amazed and write “It changes everything!” Or “Hell, he has pupils like a snake!”. Some leave detailed instructions on how to identify a reptilian in the real world. For example, some oldlanguage reports:

“When you see one of them next to you, listen – they focus on the letter” c “, stick out the tongue from the mouth like snakes, their pupils change their shape, the skin turns green. All this will happen if you can make one of them angry with you, but watch carefully, they can suppress such manifestations – so make him angry. In short, when you see something like this, immediately try to irritate the bastard until he breaks up. Love and peace to you! ”

In 2012, the chronicle.su website reported that David Ike himself is under the control of reptilians who enslaved his soul and use it in their black affairs.

Indeed, look into these cold eyes of a being from a different world. He does not express empathy towards his fans, and his threats to reptilians are just a cunning conspiracy of his real intentions. Alas, Hayk himself hardly suspects that he was long ago subjugated by the lizards. 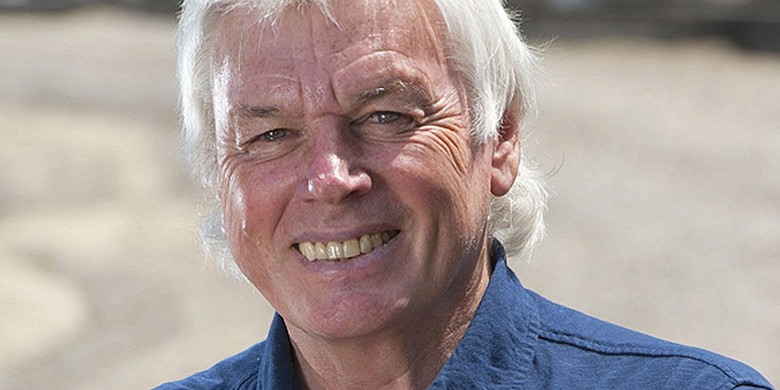 It seems to be serious about this is not worth it. Trolls and crazy – who else can excite the cult of reptilians? However, he has quite real and rather sad consequences.

In the summer of 2017 members of the Internet sect of witnesses of reptilians accused American Barbara Rogers of being an alien lizard. A few days later, the woman called the police and said she shot her young man, Stephen Mineo, because he asked to get rid of such shame.

Both Rogers and her boyfriend were followers of the cult of Sherry Schreiner, who declared herself the granddaughter of King David and “the minister, prophet, ambassador, daughter and messenger of the Supreme Deity.” She claimed that representatives of the “new world order” had conspired with the aliens and demons to enslave the world. 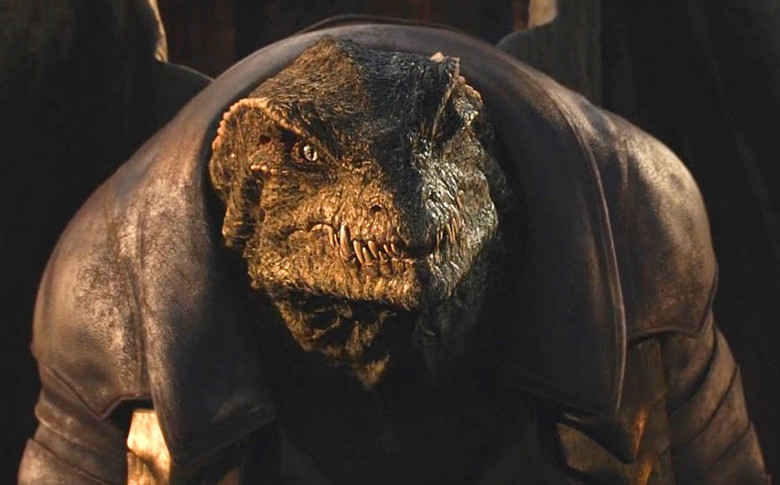 Most people want the surrounding reality to be simple, black and white – “they and us”, “good and evil.” And since the world is like this, then there must be the forces of good and evil, and as the last conspiracy sees specific individuals – whether Mark Zuckerberg or an ordinary girl.

The only problem is that it is difficult to reach a billionaire, and ask your loved one to shoot you, especially if it is in the same cult, – easily.