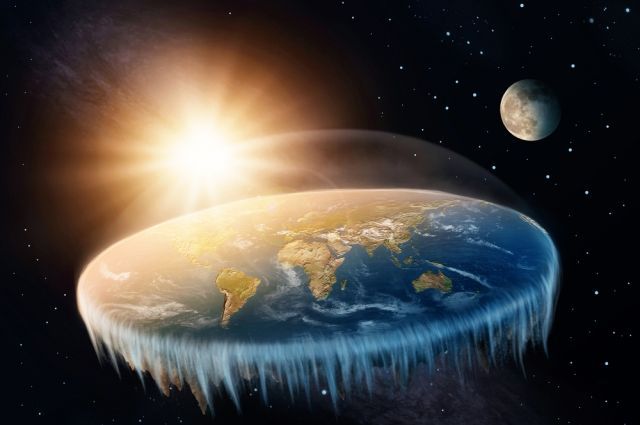 The blood-red color of the moon during a total lunar eclipse is quite difficult to explain without a basic understanding of orbital mechanics, but supporters of the conspiracy theories of flat Earth offered a new way to avoid scientific facts and came up with an original pseudo-scientific explanation of this phenomenon.

During a total lunar eclipse, which coincided with the superfusion last weekend (January 20-21), amateur astronomers observed the Moon, passing in the shadow of the Earth. The natural satellite of our planet looks red during lunar eclipses for the very same reason why sunrises and sunsets have a purple-red color on Earth — because sunlight scatters as it passes through the atmosphere.

According to proponents of the conspiracy theory of flat Earth, this astronomical phenomenon actually provides a rare opportunity to look at a mysterious “shadow casting object” that orbits around the Sun and sometimes passes right before the Moon, if you look at it from the Earth, which, according to This view has a shape reminiscent of pizza.

Although supporters of the flat earth theory consider our planet to be flat, like a pancake, they are surprisingly unanimous in the fact that the Sun and the Moon are spherical objects. However, these “theorists” argue that both the Sun and the Moon are turning around the north pole of the “pancake-shaped” Earth and never find themselves on the other side of the “pancake”. However, if these arguments were related to the truth, then lunar eclipses in the forms in which we observe them could not occur, since the Moon must be on the side opposite to the Earth for a lunar eclipse to occur. That is why supporters of the flat earth theory had to introduce a mysterious object to explain a total lunar eclipse, casting a shadow when passing in front of the Sun, but remaining invisible the rest of the time, as indicated in the message that appeared on the Flat Earth Society of Flat Earth Wiki.