The predictions of Nostradamus in 2017 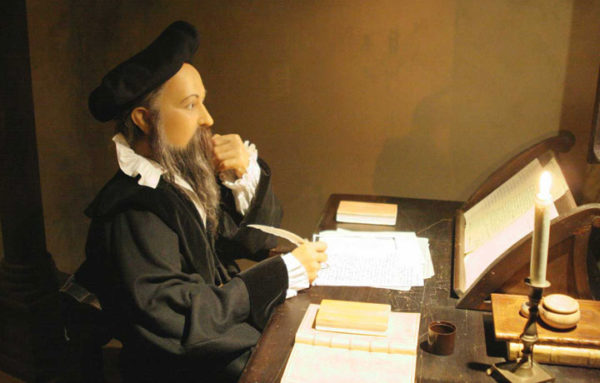 In today’s challenging conditions facing all of humanity, most people want, even briefly, to lift the veil of mystery over his future, the future of his country and even around the world. Thanks to the knowledge about the future, you can prepare, if not physically, then mentally, for the coming tomorrow.

Philosopher, seer, and prophet, Michel Nostradamus, world famous for its accurate predictions. It is his words can be relied upon with absolute certainty, because of fulfilled prophecies of Nostradamus, without further ADO, prove the truth of his gift of forecasts. During his life he wrote the ten Centuries, which consist of 942 verses-quatrains (in which are hidden prophecies of many years), some are quatrains, are not part of any Century, also a distinguished scientist and the prophet released the annual astrological almanacs. Ambiguous predictions of Nostradamus for the year 2017, the great astrologer, is still interpreted and rasshifrovat, giving to the surface a foretold, revealing to the world the fascinating truth about the future of all mankind.

The World famous French astrologer, alchemist, pharmacist, doctor and prophet, Michel de Nostrdam was born on 14 December 1503 in Saint-Remy-de-Provence, in a Jewish family. The parents of Michel were Sephardim who moved to France from the Iberian Peninsula as a result of persecution.

Nostram family was quite prosperous, they served as physicians at the courts of nobles. The whole family was baptized into the Catholic faith, but in those days the French authorities wary of baptized Jews, suspecting them of the sin of unbelief in Jesus Christ. Due to the fact of the matter is okinawas of persecution, the Jews were forced to live in close-knit communities.

So passed the childhood of the future prophet. Nostardamus prediction for 2017 godv the age of 14 years, Michel de Nostrdam went to the University of Avignon to study, where he studied grammar, logic, rhetoric, geometry, arithmetic, astrology and music. However, a year later he had to drop the class, as in 1519 the plague broke out and the young Michelle decided to become a doctor. He was trying to find a cure for the plague, but did not succeed in this difficult task so quickly.

In 1534 Michel de Nostrdam received his doctorate. Since then, the doctor’s name was changed to “Nostradamus” in the Latin style. In 1537 the plague killed his wife and children of Michel Nostradamus.

A year later, it begins to “shake” the Inquisition. Until the mid 50-ies of the XVI century Nostradamus struggling with the plague in France. Despite the thorny and winding path in the field of healing, Nostradamus did a lot to combat the plague.

Already in 1555 published the first astronomical almanac of Nostradamus and, almost immediately, he presented the first edition of the Centuries. 393 quatrain harbored a secret truth about the future. Died predictor in the Cabin of gout, which tormented him for several years.

On the marble slab of the deceased, is carved immortal inscription: “Here lie the bones of the famous Michel Nostradamus, alone of all mortals, who was worthy of his capture almost divine pen, through the influence of the stars, the future events around the world.”

Around the prophecies of Nostradamus, specifically relating to 2017 there are numerous differences. Some argue that Nostradamus never wrote about our time, and all this attracted “for ears”. Others vehemently insist that there are quatrains that describe events of the present day and near future. Anyway, every person has the right to decide whether to believe him predpisaniyam great astrologer or not. In the future everything will fall into place and become clear overall picture.

According to Nostradamus, in the near future, the light should appear a freak (an ugly baby). It would be a sign of dark days for mankind. The beginning of darkness coming from the East. People in turbans will unleash a brutal war. Nostradamus wrote about the military conflict between the two Arab countries. Will flow rivers of blood. Other States cannot stand aside and will also participate in the bloodshed. Subsequently, in a deadly battle shlestnutsya two worlds – Christian and Muslim.

During the war, will be applied a dreadful weapon of mass destruction. The weapon is chemical. As a result, many people will massively migrate to the North. In addition to human cruelty and thirst of blood, the people will suffer from natural cataclysms. By the beginning of 2017 will fall on the ground streams of water. The rains are so strong that several months without interruption, are flooding European countries.

Italy, Czech Republic, Hungary and the UK will lose part of their territories — they simply disappear under water. Judging by the quatrains of Nostradamus, the continents are almost completely empty, and the once flourishing city in ruins. And for some time Europe will be empty.

Water bodies in France are infected or contaminated. On this basis, possible riots. Nostradamus foresees a mass evacuation of the French in places not so affected by tectonic upheavals.

From all natural disasters and the vicissitudes of war the least affected Russia. In addition, according to the great predictor, what Russia will drop the role of chief arbitrator in resolving global issues and settlement of the various conflicts of the world level.

In view of all the ills of natural character, as well as considering the human factor, the geopolitical world map will be slightly reshaped and the position of a superpower is, again, Russia.

Acting as a peacemaker, Russia will prevent the global redistribution of the world that will add to the state of serious political weight, given the global economic crisis. This crisis strongly affected the United States that could lead to war between Russia and the West weakened.

Not a very rosy future predicted for us a great visionary. Yet, we should not be afraid, because this is just speculation of experts, solved according to the quatrains of Nostradamus.

Tags: The predictions of Nostradamus in 2017