The universe is a hologram? 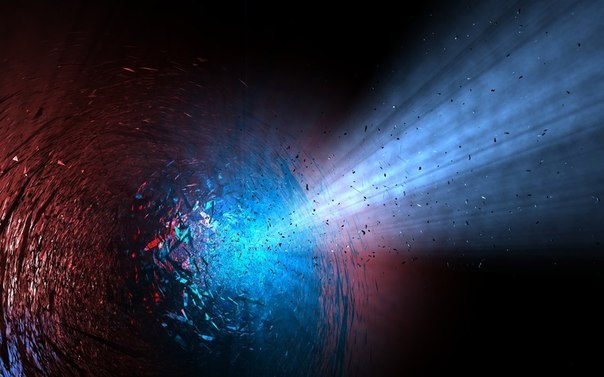 In 1982, a magnificent thing happened. At the University of Paris a research group led by physicist Alain Aspect conducted the experiment, which ing can be one of the most significant in 20 century.

Aspect and his team discovered that under certain conditions elementary particles, e.g. electrons, is able to instantly communicate with each other regardless of the distance between them. Doesn’t matter Between them are 10 feet or 10 billion miles apart.

Some
every particle knows what the other is doing. The problem with this
the discovery is that it violates Einstein’s postulate on the ultimate
the speed of propagation of interaction equal to the speed of light.

Since
traveling faster than the speed of light is tantamount to breaking the time
barrier, this daunting prospect has caused some physicists to try
to explain the experiments of Aspect difficult detours. But the other is
inspired to offer even more radical explanations.

For example,
University of London physicist David Bohm felt that from the opening of
Aspect implies that objective reality does not exist, that, although
on its apparent density, the universe at its core — a phantasm
a gigantic, splendidly detailed hologram. To understand why
Bohm made this startling conclusion, I must say about holograms.
The hologram is a three-dimensional picture taken with
by means of the laser. To make the hologram, first of all
photographed subject should be illuminated with laser light. Then the second
the laser beam, adding to the reflected light from the object, gives
interference pattern, which can be Zaphod-sated on film.

What
else can carry a hologram – is not investigatory
looks like the senseless alternation of light and dark lines. But
it is necessary to highlight the other laser beam, as appears immediately
a three-dimensional image of the original object. Three-dimensionality — not
the only remarkable property inherent in the hologram. If
a hologram with a picture of a rose is cut in half and lighting laser,
each Polo-wine will contain the whole image of the same rose
exactly the same size. If we continue to cut the hologram on
smaller pieces, each of them we again find the image
the whole facility. Unlike conventional photography, each site
hologram contains information about the whole subject, but with proportionally
a corresponding decrease in definition. The principle of holograms “all in each
part” allows us a fundamentally new way to approach the issue
organization and orderliness.

Throughout most of its history Western science
developed with the idea that the best way to understand a physical phenomenon,
whether a frog or an atom, is to dissect it and study its constituent parts.
Imagine an aquarium with ribagorzana showed us that some
things in the universe not amenable to study in this way. If we
to dissect something arranged holographically, we will not get the parts from
which it is composed, and get the same thing, but less accuracy .
This approach is inspired Bohm to a different interpretation of the work Aspect. Bohm was
I am sure that the elementary particles interact at any distance not
because they are exchanged by some mysterious signal between
themselves, but because their separateness is illusory. He explained that on
some deeper level of reality such particles are not
separate objects, but are actually extensions of something more
fundamental. So it is better to understand

Bohm suggested
in the following illustration. Imagine an aquarium with fish. Imagine
also, you cannot see the aquarium directly, but can
watch only two TV screen, which re-give pictures from cameras,
located one front, the other side of the aquarium. Looking at the screens, you
can conclude that the fish on each of the screens are separate entities.
Since the cameras transmit images under different corners, fishes look
different. But, continuing observation, after a while you
will find that between two fishes on different screens there is
the relationship. When one fish turns, another also changes
the direction of movement, a little different, but always, respectively
first; when one fish you see the full face, the other certainly in profile.
If you are aware of the entire picture of the situation, you will soon conclude that
fish must somehow instantly communicate with each other, than what is
accidental coincidence.

Bohm argued that this is what happens with
elementary particles in the Aspect experiment. According to Bohm, the apparent
superluminal interaction between particles tells us that there is
a deeper level of reality, hidden from us, higher
dimension than ours , as in analogy to an aquarium. And, he adds, we
we see the particles separate because we see only part of the
reality. Particles — not separate “parts” , but faces more
deeper unity, which eventually also holografice and
invisible. And since everything in physical reality is composed of these
“phantoms” , the observable universe itself is a projection,
hologram. In addition to its “fantomette” , such a universe can have
and other amazing properties. If the apparent separateness of the particles
is an illusion, then, on a deeper level, all things in the world
can be infinitely interconnected. The electrons in the atoms of carbon in our
brain are associated with electrons of each floating salmon, each beating
heart, each flickering star.

Everything interpenetrates with everything and though
human nature all share, dismember, to lay out
through all the phenomena of nature, all the divisions as needed
artificial and nature eventually appears seamless
web. In a holographic world even time and space cannot be
taken as a basis. Because such characteristic as position, not
make sense in a universe where nothing is actually not separated from
other; time and three-dimensional space, like images of fish on the screens,
will need to be considered as nothing more than projections. At the same time, more
deeper level reality is a sort of superhologram in which
past, present and future exist simultaneously. This means that with
using appropriate tools it may be possible
to penetrate deep into this superhologram and retrieve long-forgotten paintings
last. What else can carry a hologram — is not
known. Suppose, for example, that a hologram is the matrix that gives
the beginning of everything in the world, at least, it has all the elementary particles,
who took or will ever take any possible form
of matter and energy, from snowflakes to quasars, from blue whales to
gamma rays.

It’s like a universal supermarket in which there is
all. Although Bohm and acknowledged that we have no way of knowing what else is fraught with
imagine a hologram, he took the liberty to say that we have no
reasons to assume that in it more anything is not. Other
words, probably, holographic level of the world — just one of
steps of the infinite evolution. It was discovered that the properties
holograms added another striking feature is the huge density
record. Just changing the angle at which the lasers illuminate the photographic film,
it is possible to record many different images on the same surface. It was
it is shown that one cubic centimeter of film can hold up to 10
billion bits of information.