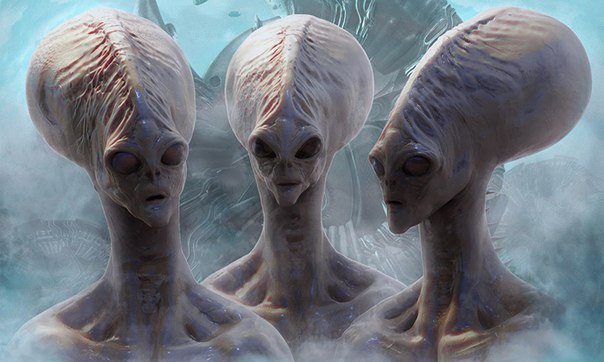 Many researchers studying possible alien activity, believe in the existence of the underground bases that are in different parts of the world have equipped and use aliens.

After all, on the surface of the planet such objects are easily detected – and then the representatives of extraterrestrial civilizations simply will not be able to work with the necessary secrecy. How plausible conclusions about the aliens underground?

In the late 1960-ies the American Newspapers reported the story of a young man named Dan henrickson, who, along with his friends went Hiking in the mountains. Dan behind his squad, and it was suddenly approached by two strange figures. They dragged the young man to some kind of mysterious machine next to which he lost consciousness.

When the boy came to, he saw that is in a round dark room, and bent over him unknown creatures with big eyes and four fingers. Consciousness once again left the hapless tourist and the second time he woke up next to the entrance to the cave. I must say that the caves in this place form a real maze. Almost immediately he found the police – it turned out that from the time of loss guy passed three days and friends called for help. The body of the young man was covered with small bleeding cuts.

The victim claimed that all this time was somewhere under the ground – that is, if we are talking about the kidnapping of Dan aliens (and it is to this thought inclined ufologists), then their base was hidden in the maze of caves.

Few years later a similar case occurred near the Californian city of Bishop. Cave explorers-fans of the couple iris and Nick Marshall explored a local cave and found an underground room with smooth walls, on which were inscribed strange characters. From the holes in the walls in the room penetrated the dim light.

Nick and iris tried to look into these holes – but there came the growing sound of sirens, the vaults and the dungeon shook. The couple lost consciousness, but before it had time to notice that the back of the room the huge door. Iris and Nick woke up in front of the entrance to the cave and found that all their gear was gone.

The British UFO researcher Timothy hood has done research in Puerto Rico and published their results in the books Database of the aliens and the Threat of invasion. He interviewed local people and found that those often met the aliens coming out of the ground and disappearing in the same place.

One of the Puerto Ricans, Carlos Mercado, in 1988, aliens have taken to their underground base. According to Carlos, there was something like a factory, where workers collected strange device. The aliens spoke with Carlos and told him that this framework exists to service their aircraft, and that the main goal of the aliens is to study the life of earthlings.

Tibetans often see unidentified flying objects that appear out of the ground. In 2013, the newspaper India Daily has published an article about the mysterious phenomena in the region of Ladakh near the mountain pass, Kongka La. It is controlled by India and the nearby area Aksaichin is part of people’s Republic of China. Journalist Sudhir Chad claims that somewhere in this place there is an underground base of aliens. He cites interesting facts.

In 1962, in the regions of Ladakh and Aksaichin happened border conflict, but then the governments of India and China suddenly came to an agreement not to claim these areas. According to the journalist, it could be part of the conspiracy of the authorities of both countries with the aliens, which is left alone.

Strange is that neither India nor China is absolutely not interested in studying these areas of Tibet. These areas are closed to the public, there are only military and a few locals.

27 Dec 2012 adjacent to the area of Tibet territories was a strong earthquake. Among the population immediately rumors that it was not random and something to do with the activities of the underground base of the aliens, because shortly before the accident dramatically increased UFO activity.

The pilots of the Chinese and the Indian air force carefully around this area. According to them, the air above it first by themselves off navigational instruments, and later if the aircraft does not turn back, failing engines.

Indian TV news showed a story about how with the territory of Ladakh rose several UFO triangular shape. They entered a space where you can fly local planes and helicopters, they were accompanied by Indian fighters, ready to shoot down any threatening object humanoids.

And the newspaper India Daily has accused the government of India and China in collusion with the aliens. Journalists believe that the governments of both countries expect to obtain from aliens, new technologies and so carefully guard their underground base.

In the U.S. state of new Mexico on the border with the state of Colorado has a military base cartridge case muzzle. The researchers believe that it is another underground base of the aliens who conduct biological experiments on people and animals.

Since 1970 here regularly lost cattle – and found sheep and cows there are sharp deviations from the normal state of the body, for example, a 70-fold excess of potassium content in tissues.

In 1990 researcher Jason Bishop published my notes on visit this site as part of a scientific group. He argued that there are living aliens that sort of look like Scandinavians. The participants of the expedition saw numerous UFO and managed to approach the canyon wall, from under which they flew.

Another researcher, John Lear, having been in this place, claims that on the surface are masking the houses with tiled roofs, and the base alien is under the ground and has seven levels of depth.

John Lear said that he was able to communicate with the aliens and learn their history. In 1979, the U.S. military captured their hydrogen reactor, which had the size of a basketball, causing the aliens could not fly. Then the aliens took hostage 44 people and demanded the return of the device. The Americans called special forces commando. Killing hostages, and 22 commando, another six people were missing. The bodies of all the dead were destroyed by spontaneous combustion.

After that, the Americans gave a base cartridge case muzzle at the disposal of the aliens and protect it from possible invasion, by keeping the regime of high secrecy.

In 1987, a former employee of security service base, Thomas Castello, gave the press more than 30 photographs and a selection of documentary materials on the basis of cartridge case muzzle. They confirm the presence of seven underground levels and over 100 secret exits branched out of the cave maze.

The base staff consists of aliens and humans working side by side with aliens. The main objectives of the experiments according to Thomas Castello, are the development of methods of mind control and the creation of hybrid human and alien. At the lowest, the seventh level is the fridge with thousands of frozen human bodies and internal organs. Here is also a repository of embryos obtained by crossing of space aliens with humans.

Materials and numerous interviews Castello was published in a book called War in its cartridge case. 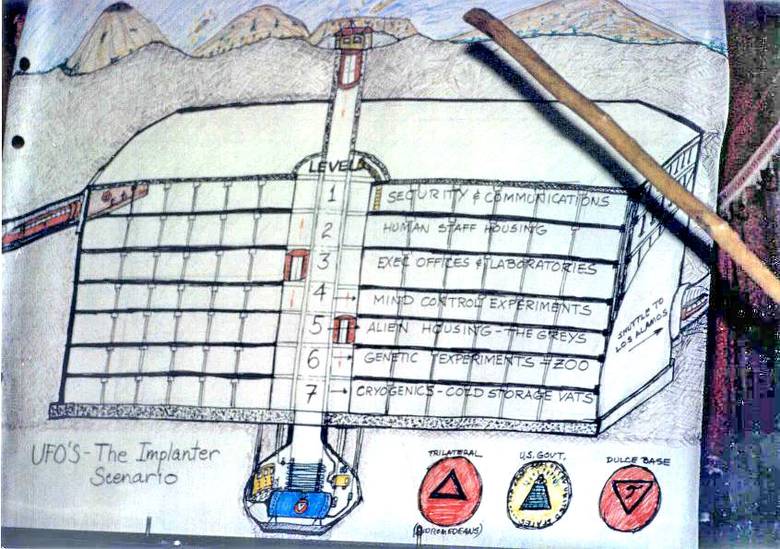 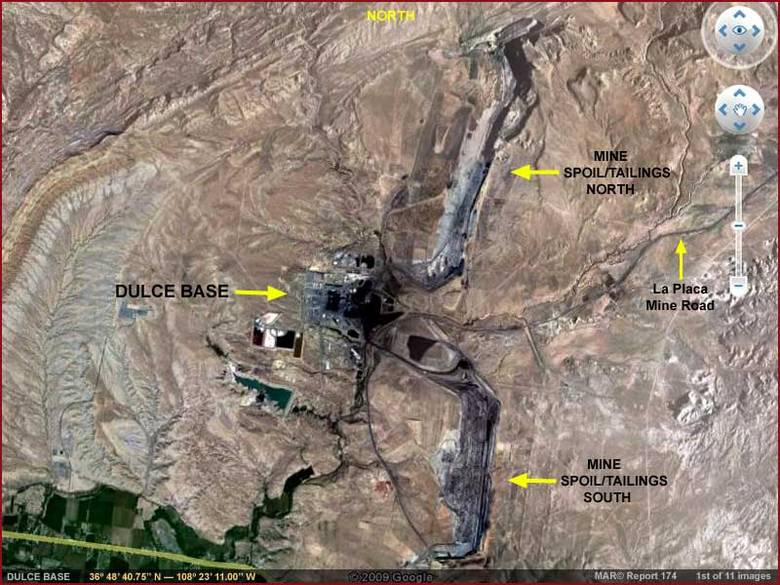 Some details about the work for the press said another former employee Frederick Atwater. According to him, people are kidnapped for experiments on earth and the alien colony at the bottom is a huge space, connected by elevators and tunnels.

All the witnesses are unanimous in the opinion that the database exists with the consent of the American government and the protection of the United States from aliens new knowledge and technology.

Another witness of the events on the base of the cartridge case muzzle, engineer Phil Schneider, was one of those who participated in the battle 1979 and survived. In 1995 he delivered a series of lectures about underground alien bases.

Seven months later, the body of Schneider found in his house. Engineer strangled with piano wire, and before the death was brutally tortured.

Shortly before the massacre of him, Schneider told that the underground facilities for aliens was created by U.S. army units since the 1940-ies. A little later, the Americans made contact with aliens, and in 1954 the administration of President Eisenhower signed with them the contract on cooperation.

In return granted bases and permissions to use to experiment on kidnapped humans and animals, the Americans got the technology that causes earthquakes, which are later tested in 1989 in San Francisco and 1995 in the Japanese city of Kobe.

Both natural disasters were distinguished by destruction of too many buildings compared to similar incidents. Remember that the earthquake of 2012 in South-East Asia many researchers also do not consider random.

Also, according to Phil Schneider, for alien technology in 1972 at the Chicago laboratory was developed by the AIDS virus, which used a biological selection of aliens.

What is actually happening in the underground bases? It is known that only in the US, more than 130, they are located throughout the country, and many of them are connected to each other. And if the version on the cooperation with the aliens is true, then the representatives of extraterrestrial civilizations have excellent springboard for the seizure of power on our planet.