Who deformed the outer solar system? 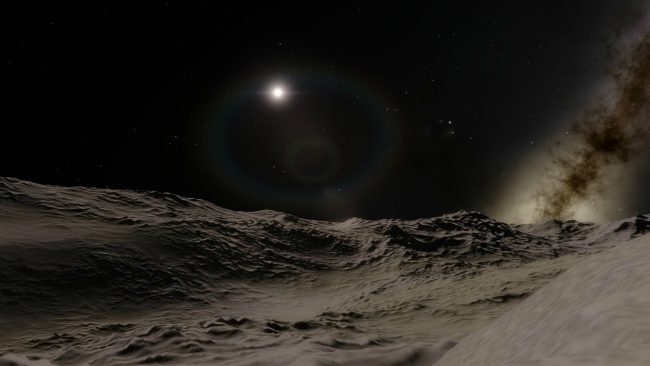 In the far corners of our solar system there is a mystery. For a long time, astronomers believed that the eight planets rotate on almost ideal circular orbits, because they once formed in a swirling disk of dust and gas surrounding the young sun. But in 2003, scientists discovered something strange: a dwarf planet Sedna has a strange orbit, changing position from two distances to Pluto to more than twenty distances to the Sun. And she is not alone. Over the years, astronomers have discovered almost two dozen distant ice objects whose orbits are elongated and strangely inclined in comparison with the plane of the solar system.

To explain such oddities, scientists suggested that, perhaps, these worlds are scars of a cruel past. Perhaps, one day in the youth of the solar system, a star passed by and knocked these worlds off course. Or the distant ninth planet by its gravity violated the order in our system.

The last hypothesis gained weight in the last few years, forcing the first to smell the dust, says Susanna Pfalzner, an astronomer from the Radioastronomy Institute. Max Planck in Germany. Anomalies on the orbits of several small objects of the outer solar system have accumulated evidence that the “ninth planet” is about 10 times larger than the Earth by mass. Meanwhile, the star intruder was considered too unlikely – until now. Palatzner and her colleagues recently published a paper on the arXiv preprint server, which was adopted by The Astrophysical Journal, which showed that stars can fly near our solar system much more often than they thought. These results not only give weight to the theory of the stellar span, but can also explain how the “ninth planet” generally found itself in its strange orbit.

Astronomers know that the Sun was not always so lonely. It was born in a cluster of hundreds or tens of thousands of stars that scattered throughout the galaxy in just 10 million years. Therefore, while our Sun was inside this cluster, the stars scurried back and forth in a dizzying dance that could easily lead to a flight into our nascent solar system. But after the explosion of the cluster, the probability of such an invasion fell almost to zero. In any case, they thought so. But Palatzner and her colleagues now argue that the chances of an invasion remained relatively high after the conglomeration began to crumble. After a lot of lengthy computer simulations, they found that a star of mass with our Sun with a probability of 20-30% could fly in 50 – 150 AU. from Pluto (1 AU – this is the distance from the Earth to the Sun, about 150 million kilometers). Of course, such a close approach would shake our young Solar system.

Although large planets would remain untouched (the Sun, for example, almost does not feel the weak gravity of the eight planets), an invasion could inflate small objects by placing them in strange orbits within the solar system. Moreover: the simulation also recreated the second trend that astronomers observed in the solar system – the propensity of external objects to group. They move together in tight groups. In simple words, the star-invader fits perfectly into models created on the basis of observations.

“But will they last for 4.5 billion years,” that is, as long as the solar system exists, “this is a million dollar question,” says Scott Kenyon, an astronomer at the Harvard-Smithsonian Center for Astrophysics, who did not participate in the study. And the Palatine with him agrees. She would like to model long-term behavior in order to understand whether the changes caused by the stellar invasion will persist throughout the lifetime of our system.

Scientists are eagerly looking for new data through a series of different observational campaigns. Several teams, for example, are already combing large pieces of heaven in search of oddities in the outer solar system. Scott Sheppard, an astronomer from the Carnegie Institution, who did not participate in the study, can not restrain his excitement on the eve of the launch of the Great Synoptic Telescope – an 8.4-meter plate that will open hundreds of new solar systems.

Kenyon, meanwhile, hopes that the Gaia spacecraft, which is in the process of clarifying the position of a billion stars with unprecedented accuracy, will help find brothers and sisters of our star. This will allow scientists to better understand the star cluster in which our young Solar System was formed, as well as the likelihood that another star will come too close. “Gaia” is our new savior, “he says. A recent Gaia study allowed tracking down the paths of nearby stars in the past and projecting them into the future, only to find that 25 stars can come dangerously close to our home for 10 million years. And, of course, everyone wants to find the “ninth planet”.

But Palatzner argues that the discovery of another major member of the solar system does not exclude a stellar flight. “It’s not a script or / or,” she says. “If the ninth plan