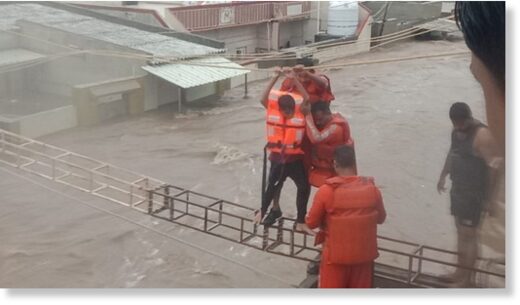 Severe flooding in the state of Gujarat on India’s west coast has affected more than 1.6 million people, according to the country’s emergency management authorities. More than 500 mm of rain fell in some parts of the state in 24 hours.

The Interior Ministry’s Disaster Management Division said Sept. 13 that the flooding has affected 1,660,254 people in 44 villages in Rajkot, Jamnagar, Porbandar, Valsad and Junagadh districts in the past few days.

Evacuations were conducted and 72 evacuation centers were established to house nearly 7,000 displaced residents. As of September 13, 2,553 people had been displaced in Rajkot district, 3,966 in Jamnagar district, 224 in Porbandar district and 5 in Junagadh district.

The flood destroyed at least five houses and damaged 28 others. Two fatalities were also reported, including one person drowning in floodwater and another death after a wall collapsed.

Dozens of roads were closed due to flooding and rain, including State Highway 15 and National Highway-01.

National Disaster Response Force (NDRF), Air Force and Indian Navy teams were dispatched to the area for rescue and relief operations. At least 31 people were rescued by NDRF teams at the Kalawad tehsil in Jamnagar. The Air Force used helicopters to rescue people trapped on rooftops or in floodwaters.

According to the Gujarat State Disaster Management Authority (GSDMA), Lodhik in Rajkot District received 516 mm of rainfall in 24 hours through September 14, 2021, and Kalawad in Jamnagar received 406 mm.