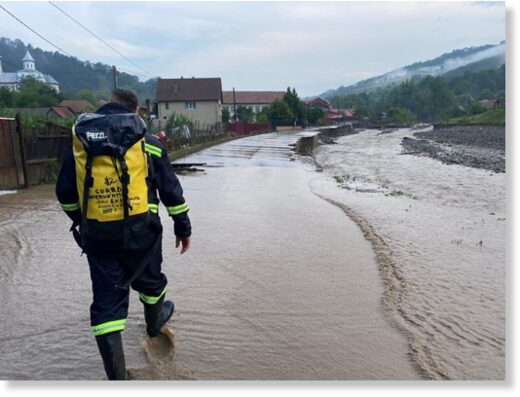 One person died, dozens were evacuated or rescued by rescue services after heavy rains and storms caused flooding in parts of Romania over the past few days.

The Inspectorate General for Emergency Situations of Romania (IGSU) reported that a man’s body was found in a river bed in Handreşti, Iasi County, on July 19, 2021. IGSU reported that the man was likely caught by surprise by an increased flow of water while attempting to cross the river.

Dozens of homes and roads were flooded as a result of heavy rain on July 18. According to the MSCE, on July 20, 60 people were evacuated in Leresti, Arges County, and 8 people in Busteni, Prahova County.

The day before, 14 people had to be rescued from six cars stuck in floodwater on the road between Dureu and Grincies in Neamts County. Evacuations were also carried out in Bistre in Alba County.

Floods and landslides have hit Alba County since July 15. More than thirty homes were flooded and more than 20 people were evacuated, mostly in areas around Okolish.