Employee of the magnetic Observatory in Lofoten, Norway, Rob of Stams deals with measuring the strength and direction of the local magnetic field and the electrical currents passing through the earth. During geomagnetic storms, the devices typically behave strange. But on 12 September was something special — they showed such graphs, as if the bell rang.

According to Stams in the morning and around noon its instruments recorded sinusoidal pulsations with a period of about 115 seconds. These natural ultra-low frequency fluctuations known to scientists as a continuous steady pulsations (pulsations continues). 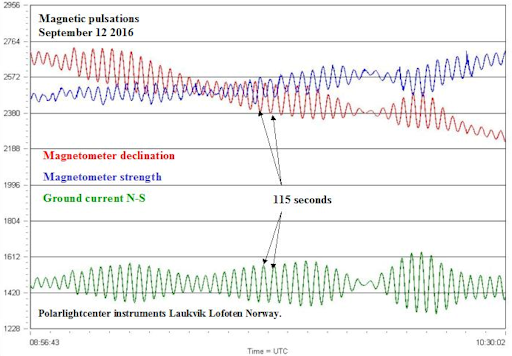 Their physics are familiar to anyone who has studied bell or resonant cavities. The Earth’s magnetic field “cuts” them in the surrounding solar wind. Pressure fluctuations in the solar wind can cause in this basin such waves.

Recorded September 12, the fluctuations are wave-type Pc4. In other words, their frequencies are in the range of 6.7–22 MHz. Such waves and related low-frequency Pc5 (1,7–6,7 MHz) can have a stimulating effect on the particles of the inner magnetosphere of the Earth, because the waves resonate with the natural movement of particles in close proximity to the geomagnetic field.