15,000 earthquakes have hit the Reykjanes Peninsula since 24 February, Iceland 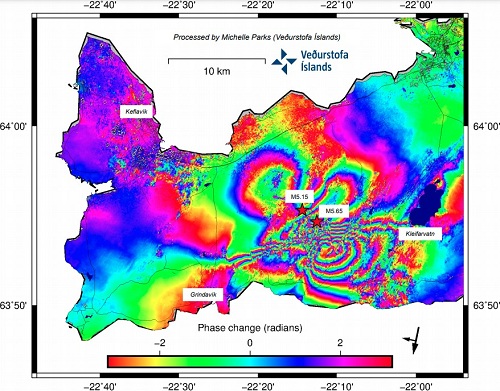 The Icelandic Meteorological Office (IMO) has detected about 15,000 earthquakes in the Reykjanes Peninsula since the strongest earthquake on February 24, 2021.

According to IMO, most of the seismic activity is concentrated in the vicinity of Keilir and Tröllängya.

On March 1, a teleconference of the Scientific Council on Civil Protection took place. The meeting was attended by representatives of the Icelandic Meteorological Office, Icelandic University, Environmental Protection Agency, Isavia-ANS, HS-Orka and ÍSOR.

The Council reviewed satellite imagery (InSAR) and concluded that the most likely explanation is that magma is forming beneath the region that has seen the most seismic activity in recent days.

In light of this new data, the council made several possible scenarios related to the magma invasion under Fagradalsfjall:

1. Seismic activity will decrease in the coming days or weeks.

2. Seismicity increases with stronger earthquakes, up to M6 in the vicinity of Fagradalsfjall.
3. An earthquake of magnitude up to 6.5 will occur in the Sulfur Mountains.

4. Magma intrusions continue in the vicinity
Fagradalsfjalla:
(1) the activity of magma penetration is reduced and the magma solidifies;
(2) Activity leads to a lava flow that will threaten cities.

It is difficult to predict the exact course of events and whether one scenario is more likely than another, IMO said.