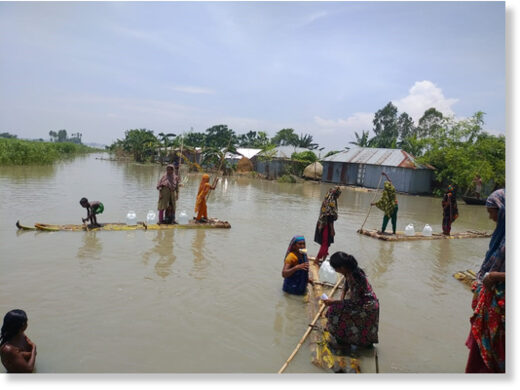 Monsoon floods are robbing millions of people of their homes and livelihoods, raising the risk of new outbreaks of deadly disease as health care resources are depleted by COVID-19.

To date, nearly 17.5 million people have been affected and more than 630 people have died in major floods in India, Bangladesh and Nepal, according to government figures.

Half of Bangladesh’s districts are under water, leaving almost 1 million families cut off from their villages.

Floods and landslides in Nepal have killed or gone missing nearly 200 people.

In India, nearly 12 million people have been affected by floods, mostly in the northern states of Assam and Bihar.

Feroz Salah Uddin, Secretary General of the Bangladesh Red Crescent Society, said: “This is one of the biggest rainfall floods we have faced in many years and the worst is perhaps yet to come as we face the growing risk of malaria, dengue, diarrhea, and this exacerbation of the COVID-19 pandemic. ”

During the rainy season, floods mean that a large portion of the South Asian population is vulnerable to diseases such as dengue, malaria, leptospirosis and cholera. Bangladesh experienced the deadliest outbreak of dengue fever in 2019, with over 101,000 cases and nearly 180 deaths. India reported that 136,000 people had contracted the disease and many were hospitalized.

Previous years show how devastating these diseases can be to communities in South Asia, so Red Cross and Red Crescent teams in the region are urgently scaling up their flood response activities, which include distributing mosquito nets and working with communities to reduce their exposure to such diseases. like malaria and dengue.