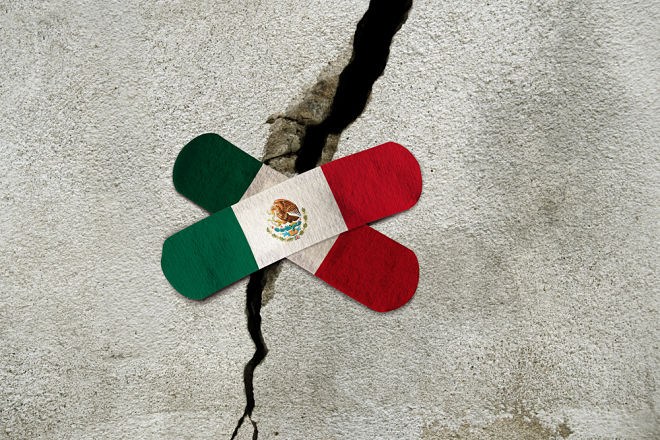 The earthquake that killed 370 people in Mexico was so powerful that the whole tectonic plate broke up, scientists say.

Scientists still do not know exactly how an underground push with a magnitude of 8.2 tore the mantle and crust, striking near the city of Puebla in September 2017.

Plate Coconut cracked when quickly cooled, dived under the North American plate. This process is known as a subduction zone. After a quick cooling, the young plate became fragile, and an earthquake broke it.

Scientists have suggested that sea water leaked through the stove and made Coconut cool down quickly. This could make it more fragile and vulnerable to fracture, say scientists at the University of Oregon (USA).

If such cooling caused by water, it may be assumed that other areas, especially Guatemala south of Central America and the US West Coast, are vulnerable to similar earthquakes.

Usually such events occurred on cooled tectonic plates with temperatures below 648 ° C. But an earthquake in Mexico damaged a “young and warm” plate with a temperature of about 1000 ° C, which “should not break,” the researchers say.

The subduction zone of the coconut tectonic plate aged 25 Ma is 965 km from the mid-ocean ridge.

The lead author of the study, Diego Melgar, says: “We have no explanation for how this was possible.”

“We can only say that this is contrary to the models that we have at the moment, and indicates that more research is needed to understand this.”

“If you imagine that the plate is a huge piece of glass, the gap formed a huge gaping crack.”

“If you bend the eraser, you will see that the upper half has expanded and stretched, and the lower half has flattened out and shrunk.”

The US Geological Survey reported that the center of the earthquake was located near Puebla, 122 km south-east of the Mexican capital.

Dozens of buildings were wiped out in densely populated areas of Mexico City and neighboring states. The earthquake struck on the 32nd anniversary of the tremors of 1985, which killed 5,000 people in Mexico.