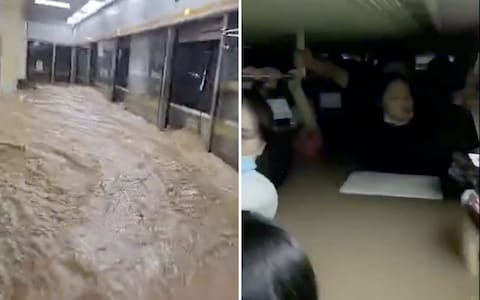 ﻿
At least 25 people were killed in the flood-hit central Chinese province of Henan, 13 of them on a subway line in its capital, which was flooded by rains described by meteorologists as the heaviest in 1,000 years.

About 100,000 people were evacuated in the capital Zhengzhou, where rail and road services were disrupted and dams and reservoirs rose to warning levels, while thousands of troops began rescue efforts in the province.

City officials said more than 500 people were pulled to safety from the flooded subway, and photos of trains and people in them submerged up to their chests in the darkness appeared on social media.

“The water was up to my chest,” one of the victims wrote on social media. “I was very scared, but the scariest thing was not the water, but the dwindling air supply in the car.”

The rain halted bus service in the city of 12 million people, located 650 kilometers (400 miles) southwest of Beijing, said a resident surnamed Guo, who had to spend the night in his office.

“So many people took the subway, and tragedy struck,” Guo.

At least 25 people have been killed in heavy rains that have hit the province since last weekend, with seven people missing, officials said at a news conference Wednesday.

The media reported that among the dead were four residents of the city of Gongyi, located on the banks of the Yellow River like Zhengzhou, after widespread collapse of houses and structures due to the rains.

More rain is forecast for the next three days in Henan province, and the People’s Liberation Army has sent more than 5,700 soldiers and personnel to assist in search and rescue efforts.

According to meteorologists, there was as much rainfall in three days as occurs only “once in a thousand years.”