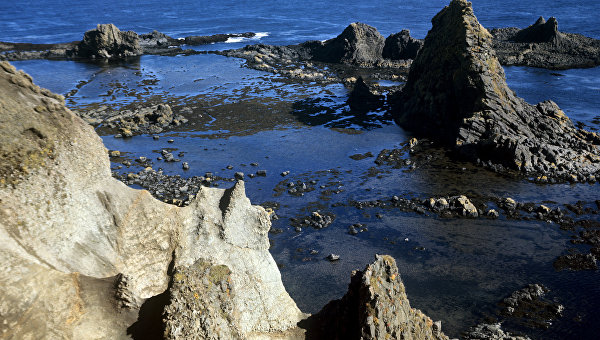 The expedition of the defense Ministry and the Russian geographical companies in the survey the Kuril Islands Matua found that on the island for several tens of thousands of years of its existence hit at least 30 tsunami, told journalists on Tuesday the head of the press service of the Eastern military district Alexander Gordeev.

“Expedition carried out reconnaissance of the island of Matua. The study the South-Eastern part of the island on the assessment of the current landscape. Studied the origin of the low-lying surfaces and hills up to 200 meters. Carried out earthworks to clean up the series of coastal cliffs up to 30 meters, bookmark and reference sections (drilling holes) to a depth of 4 meters to determine the age of the island,” — said Gordeev.

He noted that the total length of the route studies was about 300 kilometers.

“Discovered ancient lava and weathering crust, whose age, according to scientists, is at least several tens of thousands of years. Also research groups determined that the island of Matua over time its existence was exposed to at least 30 tsunami”, — said Gordeev.

In addition, according to him, the personnel military-historical expedition has started engineering works in the coastal zone of the Bay of Ainu, where surveyed areas for approach amphibious assault ship, and subsequently it is possible to percovich construction zones. Continues to be active in Double Bay to prepare coastal areas of the island to approach the large landing ship to shore.

The expedition of the defense Ministry, the Russian geographical companies, the Eastern military district and Pacific fleet, composed of 200 people under the leadership of Deputy commander of the Pacific fleet Vice-Admiral Andrew ryabukhina on six ships and vessels may 7, sailed from Vladivostok and May 14, arrived on the island of Matua. During the Second world war settled down the military forces of Japan. On the island survived underground bunkers, the runway.