4 climbers died on Mount Everest due to lack of oxygen 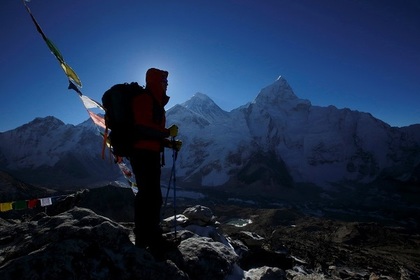 The bodies of four people were found in a tent near the last base camp before the conquest of the summit of Everest.

The ascent of foreigners – male and female – and two Nepalese guides found no signs of life of the conductors of the company Seven Summit Treks, which let down the body of Slovak Vladimir Strba, who died last Sunday. Presumably, the climbers were suffocated by the lack of oxygen inside the tent.

The names of the victims are not yet named. In the Ministry of Culture, Tourism and Civil Aviation Nepal stated that they collect information about the dead by bit. It is known that they made an ascent within the expedition of the new tracking company and on Sunday ceased to communicate. The time of death of the climbers found is also not yet established.

On May 22, reports of death on Mount Everest killed three climbers, citizens of the United States, Slovakia and Australia. May 6, while trying to climb Mount Everest again and become the oldest conqueror of the mountain, the world’s oldest mountaineer Ming Bahadur Sherhan from Nepal died. He died at the age of 85 from heart failure.

On April 30, a famous Swiss mountaineer, 40-year-old Ueli Stack, died on Mount Everest. He was on top of Nuptse for acclimatization, after which he planned to climb to the highest peak in the world in May, using a completely new route.

Over the whole history of conquest of Mount Everest on its slopes killed more than 250 people.