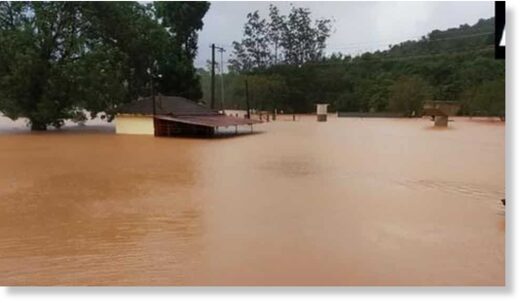 Since the start of the rainy season, more than 500 people have died across the country due to ongoing floods and related incidents. At least 1.26 people were injured and approximately 5.22,908 were displaced. The states of Bihar, Assam, Uttar Pradesh suffered the most.

Bihar continues to suffer from flooding as the river from Nepal flooded more areas. According to a report on the situation published on August 4 by the Department of Disaster Management of the Ministry of Internal Affairs, more than 59.68 thousand people were affected by the flood and 19 people died. One thousand one hundred and eighteen villages were affected. A total of 4 40 507 people were evacuated, 38 assistance centers were opened. There are now 28,664 people living in the relief camps.

Uttar Pradesh has also seen heavy rains since the start of the rainy season. More than five thousand people from 16 districts and 960 villages were affected. Six people have died since July 1. Five hundred and fifty-two houses were damaged. 956 refugee camps were opened, in which 4,340 people took refuge. About 38,000 hectares of cultivated area were damaged.

In West Bengal, 233 people have died during the current rainy season, and six people are still missing. Most died during the Amphan super cyclone that passed through South Bengal in May 2020. More than 2,18,000 people were affected from 23 districts and 1,868 villages. More than a thousand houses were completely damaged, more than 10 thousand houses were partially damaged. 138 help centers have been opened, currently housing 13,771 people.

In addition to these four states, the death toll in Kerala, Tamil Nadu and Madhya Pradesh is 28, 18 and 68, respectively. Assistance is provided across the country by 10 teams of the National Disaster Response Force.

According to the International Federation of Red Cross and Red Crescent Societies, more than 1.75 million people in South Asia have been affected by flooding and are at risk of disease.