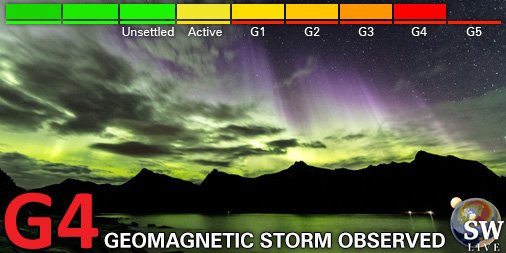 A powerful geomagnetic storm, which at times reached record values ​​Kp9 (G5) over the European territory of Russia and the CIS, a little subsided again gained strength and at the moment the storm reached the values ​​of G4.

These are the consequences of the X9.3 outbreak – the strongest in the 24th eleven-year solar cycle and over the past 12 years. This happened before the official forecast for almost a whole day. Most likely, the ejection came earlier because of the way cleared for it from the ahead SME flash M5.5 from September 4. It is also worth taking into account the fact that the initial release velocity of the plasma was 1969 km / s.

The Earth’s magnetosphere has been dealt a powerful blow. She plunged into a red-hot substance, which the day before yesterday was part of the atmosphere of the Sun. At the Earth, the plasma velocity was about 800 km / s at a rate of 350-400 km / s.

According to forecasts, the geomagnetic storm will rage for a long time, which already caused a surge of observation of the polar lights in the USA and Canada, as well as in Kamchatka. Tonight, auroras can be observed up to 55 gr.s.s. (the breadth of Moscow and Kazan).