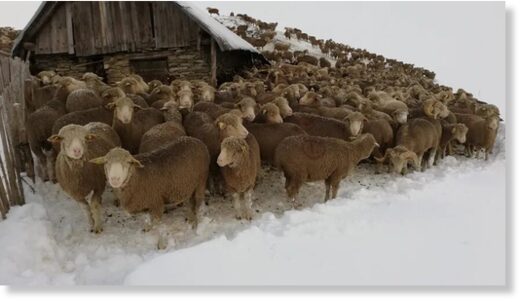 Thousands of sheep were snowed at the Col du Gandon in Savoy, southeastern France, at an altitude of 2,000 meters after heavy snowfalls caught the shepherds by surprise.

On Sunday, local residents managed to deliver food supplies to the herds.

6,000 sheep and about 100 head of cattle were stuck in the Col du Gandon mountain pass with their shepherds on Friday night, September 25, after an early snowfall combined with icy winds created snowdrifts up to two meters high.

On Sunday, the city hall of Saint-Colomban-de-Villars opened a crisis center and began an operation to deliver animal feed.

Together with teams of volunteers, they cleared the roads with snow plows and managed to lift about six tons of forage to the 1900-meter pass.

“They huddled together in the snow about 30 to 50 cm. Some animals did not eat for 36 and 48 hours,” the mayor of Saint-Colomban-de-Villars, Pierre-Yves Bonnard, told the local radio France Bleu.

“The most urgent thing was to feed them all, and we did it,” he said.

“It will take us almost a week to evacuate all the animals. Until then, we must feed them. ”

The last herds usually left the high-altitude pastures at the end of October, and the sudden snowfall took farmers and shepherds by surprise.

Bonnivar, who is also president of the USAP (Union for the Advocacy of Pastoral and Rural Activities), said the situation was “exceptional.”

So far, about 800 sheep have been evacuated, with another 1,000 to be rescued on Monday.

But with more snowfalls expected this week, the evacuation could take longer.

“Either the weather gets worse and we have to deliver more animal feed and speed up the evacuation,” Bonnivar said. “Or the situation will improve and they can scrape the ground and feed themselves. All we are trying to do is, of course, keep them all alive. ”

The Col du Glandon, a high mountain pass in the Dauphin Alps in the Savoy, featured prominently in the Tour de France cycling races.