A giant landslide took eight houses to the Norwegian Sea 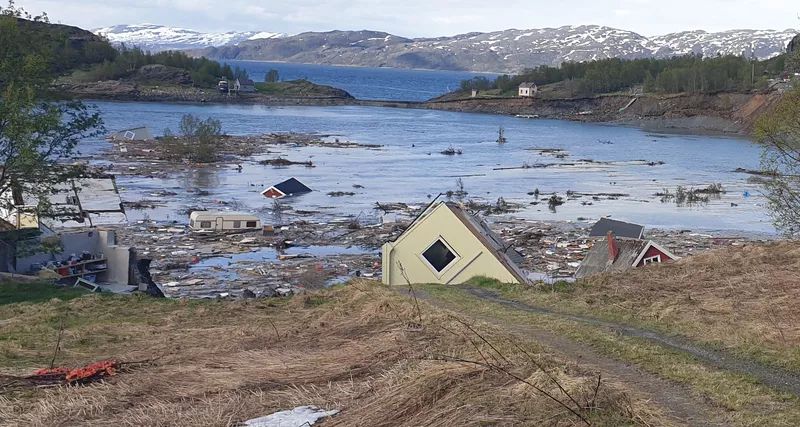 The effects of global warming were felt like no other residents of the municipality of Alta (Alta) in Norway – eight of their houses near the village of Talvik (Talvik) literally moved to the sea. This is due to a huge landslide caused by the violation of soil stability in the subarctic climate due to an increase in average annual temperature.

According to the local news portal NRK, the width of the stepped earth seam reached 650 meters and the width exceeded 160 meters. The incident occurred on Wednesday, June 3, during the day, soil shifts were noticed in advance and one person had to be evacuated – only the dog that was saved later remained. For several hours, the police and emergency services could not begin to examine the destroyed houses because of the danger of a landslide again.

Partly, the victims were avoided due to the fact that most of the buildings destroyed by the elements are suburban houses and on weekdays there was nobody there. An eyewitness managed to photograph “the flight of his home from the coronavirus” to the camera from a safe point. The video shows how several houses with adjacent buildings easily, like toys, set sail on the waters of the Norwegian Sea.

The rescue helicopter S-61 Sea King circled over the scene for several hours in a row, its crew studied the damage through both conventional optics and infrared cameras. No traces of the injured or dead could be found, later these findings were personally confirmed by the ground crews.

A spokesman for the Norwegian Directorate of Water and Energy (NVE) said it would be possible to return to the surrounding houses only after a comprehensive survey of the coast. Initial data showed that at least two more landslides of a smaller size could be expected. In the published photos and frames of the video, it is noticeable that large masses of water flow from the resulting cliff.