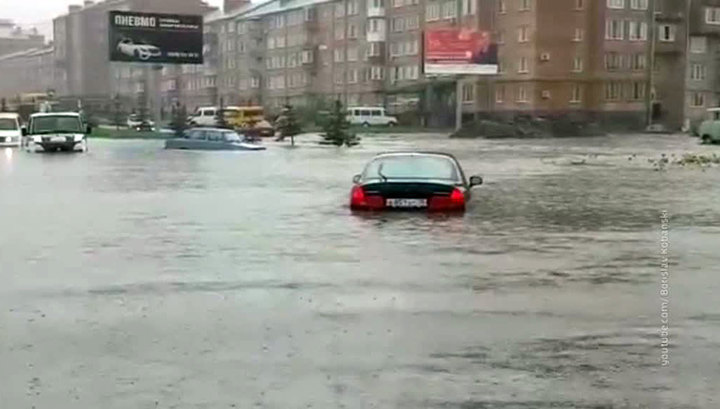 In the North Caucasus – torrential rains. Because of downpours in the traffic jams, the capital of North Ossetia rose. The roads of Vladikavkaz have turned into rivers, and the machines – rather, into submarines. How did they try to tame the elements?

In Vladikavkaz was the first spring shower, which turned the streets of the city into violent streams. In some places, the water level exceeded the half-meter mark. On the streets of the city traffic jams were formed. In the area of ​​the Vikalin market, cars were immersed in the water by the very mirrors. Those who died engines, had to pull out a tug from the huge deep-water puddles.

Such a situation in the city was formed not so much because of the rainfall – the rain was not anomalously strong, – the problem is that water for various reasons from city roads goes very slowly. People say that the storm sewer can not cope with the floods, and on some streets the livestock is either rolled up into asphalt, or not at all. Most importantly, as a result of a shower, no one was hurt, and the water did not cause significant damage. There were also no appeals to the MOE.

The rain in Vladikavkaz has already stopped, the water has left the city streets. But, meanwhile, in the near future weather forecasters again promise precipitation, however, as far as they are plentiful, it is unclear.

In Ingushetia – a similar situation. Here utilities are trying to quickly deal with flooding, but do not always have time. Weather forecasters say that such weather will continue for several more days, there will be a strong wind up to 20 meters per second.