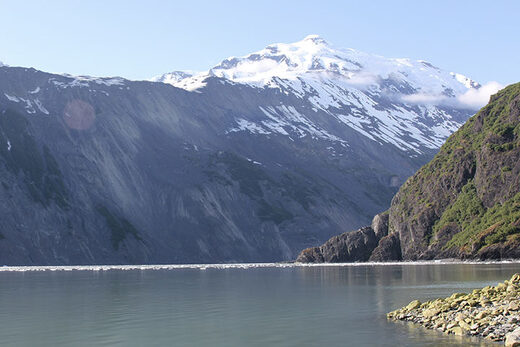 While kayaking down the Barry Arm Fjord, Valisa Higman noticed strange cracks in the cliff overlooking the fjord.

She wondered if the slope might collapse, she thought, and emailed the photos to her brother Bretwood Higman, a geologist at Ground Truth Alaska who had studied landslides and tsunamis for decades.

Soon he surveyed the area using Google Maps and also saw cracks, but nothing in them seemed to him convincing evidence of a large landslide.

A few months later, Chunli Dai asked an Ohio researcher to check the data; she was working on a NASA-funded project to develop new ways to automatically detect landslides in the Arctic and was looking for ways to test how well her program was working.

Her project uses the high-resolution ArcticDEM dataset and machine learning to automatically locate and mark landslides.

When Dye used her instruments to survey the Barry Arm area, she got some startling results – the entire mountainside near the Barry Glacier was slowly and imperceptibly shifting. If a giant, slow-moving landslide were to suddenly hit the narrow fjord below, it would trigger an extremely violent tsunami due to the way the fjord’s shape would amplify the wave.

“Based on the height of the sediment above the water, the volume of the landslide land and the angle of inclination, we have calculated that the collapse would release sixteen times more debris and eleven times more energy than the 1958 Lituya Bay landslide in Alaska, which caused tsunami”.

This event, which was triggered by a magnitude 7.8 earthquake, caused millions of cubic yards of rock to fall about 600 meters into the fjord. It produced what is considered the tallest wave (1,700 feet) in modern history. An event that eyewitnesses have compared to the explosion of an atomic bomb, a huge wave washed away the soil in a wide ring around the bay and destroyed millions of trees.

Now scientists are convinced that a mega tsunami could happen at any moment.