A mega-iceberg is born off the coast of Antarctica 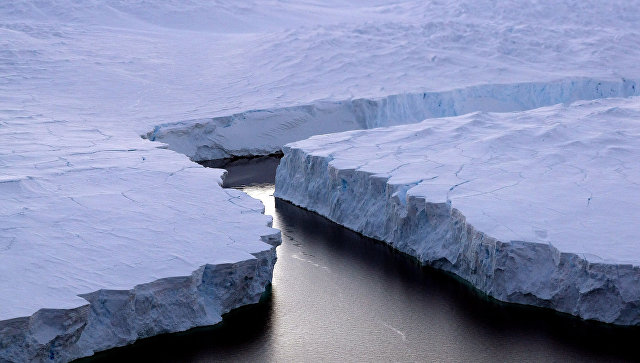 Satellite images from ESA probes show that the Larsen glacier, the most vulnerable part of the ice cover of Antarctica, has almost completely broken away from the mainland and in the coming weeks it will turn into a giant iceberg with an area of ​​Estonia.

“The crack left to overcome just five kilometers to reach the ocean.Using pictures and data from CryoSat, we calculated the thickness of the ice and came to the conclusion that the height of the surface of the iceberg will be 190 meters, and it will contain about 1155 cubic Kilometers of ice, there will be another 210 meters of ice under the sea, “said Noel Gourmelen of the University of Edinburgh in Scotland.

Climatologists, oceanologists and other scientists have long believed that climate change threatens to destroy mainly the northern ice reserves on the Earth – the glaciers of Greenland and the northern polar ice cap.

In recent years, this idea has begun to change, as scientists have found evidence that the first can disappear not the northern ice, but part of the glaciers of Antarctica, which will lead to a catastrophic rise in sea level. For this reason, NASA conducts continuous monitoring of the state of the southern ice in the IceBridge project, studying them with the help of reconnaissance aircraft, and ESA monitors their condition with the help of satellites Sentinel-1 and CryoSat-2.

These studies show that the most vulnerable and practically guaranteed candidate for destruction is the so-called Larsen Glacier on the eastern coast of the Antarctic Peninsula – it began to disintegrate in 1995, and the last fragments of this glacier, according to IceBridge data, were to begin their journey into oblivion Last summer.

And so it happened – the last images from the aircraft, received by NASA in the first days of December last year, show that in the glacier Larsen S, the last part of the ice massif of Larsen, a giant 112 km long crack, about 100 meters wide and about 500 meters deep Meters.

This crack continued its rapid growth this year, reaching a length of 200 kilometers by July 2017. Now the glacier Larsen S “holds” for the ice massif of the Antarctic with a narrow strip of ice only five kilometers thick. When the crack reaches the waters of the world ocean, the glacier will turn into a giant iceberg, whose area is about 6500 square kilometers, which is comparable to the area of ​​Estonia or the Moscow region.

In a few weeks or months, when this giant iceberg will arise, it will automatically become the largest structure of its kind, the birth of which has been documented by mankind.

It is not yet clear whether the former Larsen C glacier will “travel” through the oceans of the Earth in the form of a single piece of ice, or it will split into many other icebergs of a more modest size. In any case, scientists plan to follow its fate in the coming months and years, since an iceberg of similar sizes and its debris can pose a threat to ships passing through the Drake Passage or through the waters of the southern seas off the coasts of Africa and Australia.