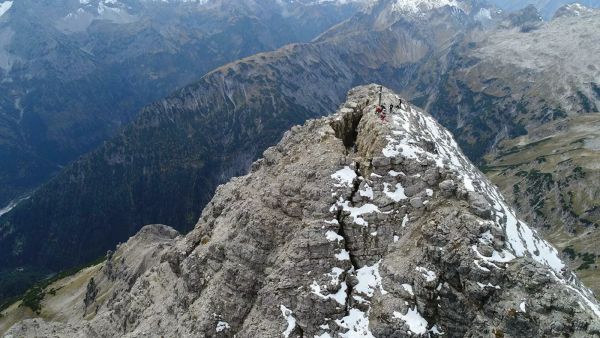 Geophysicists observing the divergence of the crack, which split the Hochvogel mountain in two parts in the Alps, revealed certain patterns in its tectonic movements. To do this, they used seismic equipment, which recorded the vibration frequency of the rock. The research results are published in the journal Earth Surface Processes and Landforms.

The top of the Hochvogel with a height of 2592 meters, located in the Allgäu Alps, is cut in two by a huge crack, the width of which in some places reaches five meters. The crack continues to spread at a rate of about five millimeters per year.

It is noteworthy that the border between Germany and Austria runs along the top, and scientists predict that at some point the Austrian part will collapse and 260 thousand cubic meters of limestone rock will slide into the Hornbach Valley in Austria. But when this will happen is difficult to say.

Researchers at the Helmholtz Center in Potsdam – the German Research Center for Geosciences and the Technical University of Munich have developed a technique for observing the strength of rock using seismic vibration instruments.

They installed six seismometers on the summit at a distance of 30-40 meters from each other. For several months, sensors recorded the frequency of the mountain’s vibrations caused by wind, temperature changes, and stress or weakening of rocks, as well as numerous small earthquakes.

The authors analyzed the resonant vibration that occurs in the rock during the initiation or release of stresses – processes that, according to scientists, may be the harbingers of upcoming major movements.

An innovative approach is that measurements were carried out directly on site and in continuous mode. Previously, long-term monitoring of the mountain was carried out only using remote sensing or one-time measurements. None of these approaches were able to identify with sufficient temporal and spatial detailing the patterns of the processes occurring inside the mountain.

The new method made it possible to construct a cyclic sawtooth frequency diagram of oscillations in the rock volume. Within five to seven days, their amplitude increased from 26 to 29 hertz, and then returned to the original value in less than two days.

Scientists have found that the increase in frequency is associated with an increase in stress in the rock mass, at which rupture usually occurs. And also the fact that just before the break, the cycles become shorter. The authors identified this as an important indicator of the danger of imminent collapse.

“With the help of the seismic approach, for the first time, we were able to register these cyclical phenomena continuously and almost in real time,” the first author of the article, geomorphologist Michael Dietze, says in a press release from the Helmholtz Center in Potsdam. and now the results need to be confirmed elsewhere. ”

Technically, it’s not too difficult, Dietze says. And the increased tectonic activity on many peaks in the Alps requires more accurate observations.

For another two years, researchers will observe how the sawtooth cycles are affected by diurnal and seasonal fluctuations, as well as the freezing cycles of water in cracks during cold winters and at night.

The authors note that even if the rock collapses, judging by the rockfall trajectory they calculated, the settlements in the Hornbach Valley are not in danger.