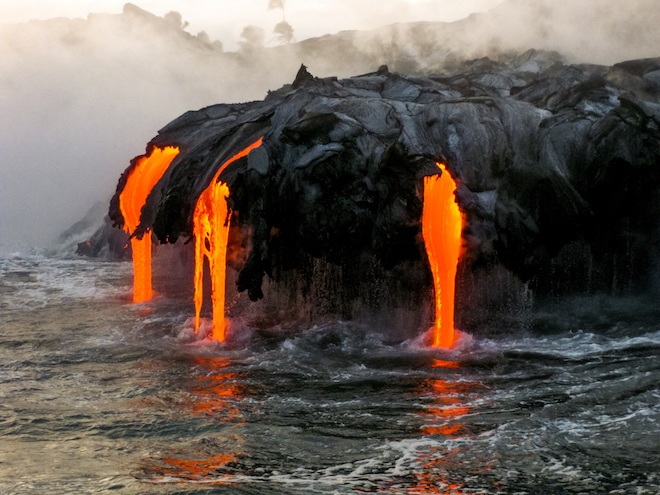 A new rift, growling like an aircraft engine and spitting magma, opened on the Hawaiian volcano Kilauea on Saturday. The erupted mountain of lava has already reached the height of the four-story building.

The crack in the pasture on the eastern slope of Kilauea is the sixteenth since the explosion of one of the most active volcanoes in the world. Thousands of people left their homes on the Big Island of Hawaii because of lava and toxic gases, dozens of houses were destroyed.

A new fault opened 1.6 km to the east on the existing crater system, which ruined the Lehalani Estates area. The US Geological Survey has warned that the possibility of new cracks remains.

Within a few hours, the fault erupted a mountain of reddish-black lava, whose height reached almost 12 meters, and the length – at least 45 meters. The pieces of magma from the crack flew 30 meters into the air.

Shortly after the crack opened, the Hawaiian Volcanic Observatory reported that seismic activity at the top of Kilauea remained elevated. The US Geological Survey reports a superficial, but not very strong earthquake of magnitude 3.5, which occurred on Saturday.

Geologists warned on Friday that during the eruption on the summit of Haelemaumau large cobblestones can be fired, and ash jets can rise to a height of 6100 meters. Ashes and debris can spread for 19 km.

The volcano began to throw out lava in a residential area last week. On Friday, US President Donald Trump announced the Big Island as a disaster area.