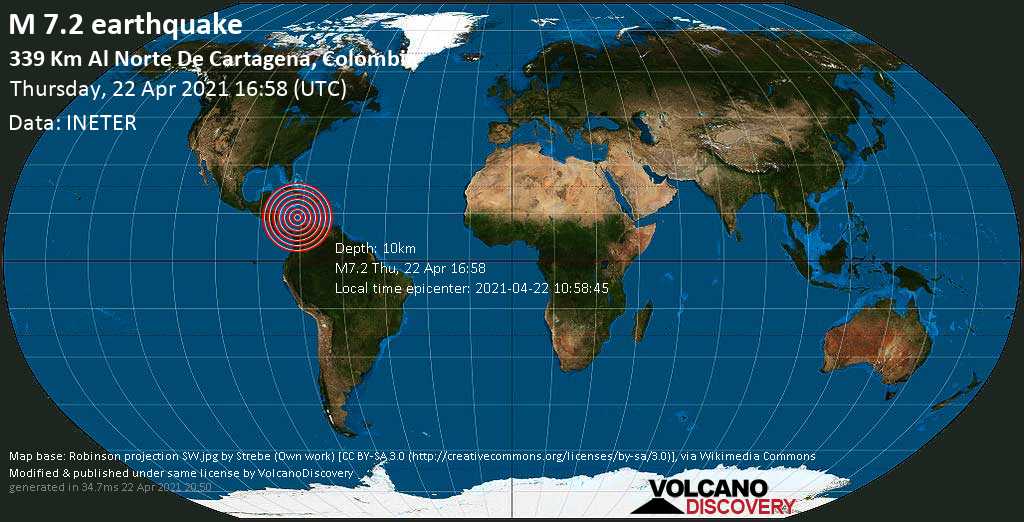 As we wrote yesterday, a powerful jump in cosmic radiation was supposed to provoke a major cataclysm, usually after such impacts from space, powerful earthquakes occur on Earth and, as it turned out, such an event was recorded, but the data about it was quickly removed from all online monitoring of seismic activity.

On April 22, 2021, a strong earthquake with a magnitude of M7.2 was recorded off the coast of Colombia, which was recorded by seismic stations and displayed on all monitoring systems, including EMSC and USGS.

Very promptly, from all sites where earthquake data are automatically posted in real time, this data was manually deleted. But many of those who follow the seismic situation in the world managed to record what happened.

The disappearance of information caused a surge of criticism and questions, to which the monitoring representatives were forced to answer. Here’s what they wrote in their defense:

“This powerful 7.2 magnitude seismic event is not believed to be the result of an actual earthquake. It could be related to some other (unknown) shaking event such as explosions, sonic booms, weather conditions or other human or natural causes.

However, it should be borne in mind that this explanation was given only by one online monitoring of VolcanoDiscovery, while the most authoritative resources, such as EMSC and USGS, ignored all questions and did not give any comments at all. 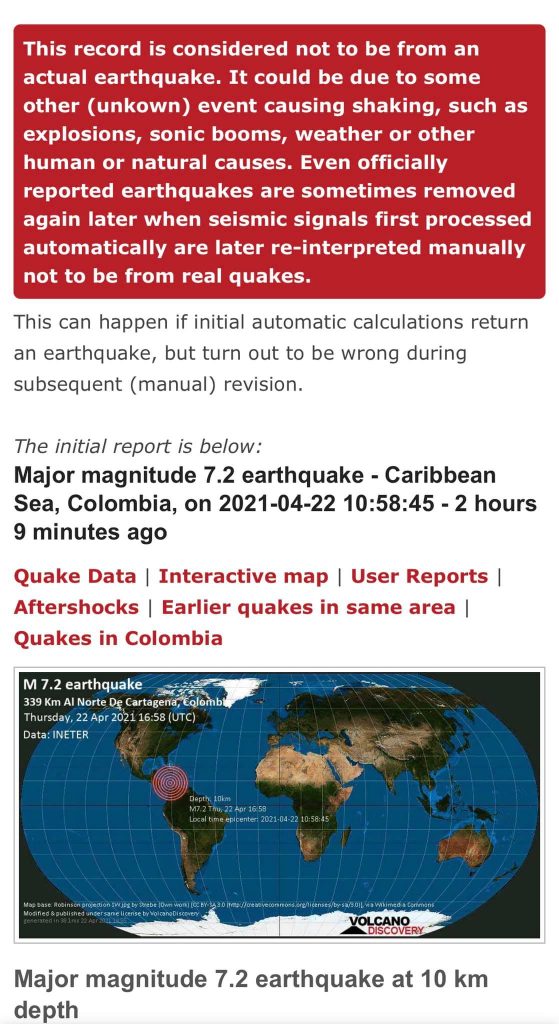 Are you satisfied with this explanation? I am completely unhappy with:

1) Can a “sonic boom” cause a 7.2 magnitude shaking of the earth’s surface on the Richter scale?

3) If it was an explosion, then what – a nuclear bomb? What explosion can cause a 7.2-magnitude concussion that no one else in Colombia has noticed?

4) The weather conditions that created the 7.2 magnitude seismic shock – what weather phenomena are capable of doing this?

This “explanation” is an ordinary answer that does not explain anything, but in fact, somewhere in the Colombian region, or rather not far from its shores, 339 km from Cartagena, something happened that caused a seismic shock with a magnitude of 7.2 on the Richter scale!

What could it be? There are many options – a meteorite fall, a submarine explosion, an oil platform explosion, the awakening of an underwater volcano.

Whatever it was, information about this event was promptly deleted almost simultaneously – different systems for recording seismic activity in the world!