A powerful earthquake may hit Bangladesh

A powerful earthquake may strike in the future for Bangladesh that affected over 140 million people and destroyed the country’s capital, Dhaka. According to a report published in the scientific journal Nature Geoscience, the researchers found evidence that under the world’s largest river Delta is a zone of subduction, in which more than 400 years of accumulated seismic pressure.

Scientists had previously known that Bangladesh is the border of two tectonic plates, but until recently it was believed that they slide in the horizontal direction near the surface and do not pose a serious threat to the population. A recent study conducted by experts at Columbia University, revealed that beneath the Ganges Delta is a zone of subduction (where one plate sinking under another), and one of the plates and locked in tension.

“Many of us have long suspected the danger, but we did not have enough data to know for sure,” says the study’s lead author Michael Steckler, a geophysicist from Columbia University. “Now we have the data and can estimate the size of this zone”. According to the scientist, the voltage between the two plates is accumulated, at least 400 years, so in the case of slipping of one plate under another is expected earthquake of magnitude 8.2, it is possible – 9.0. 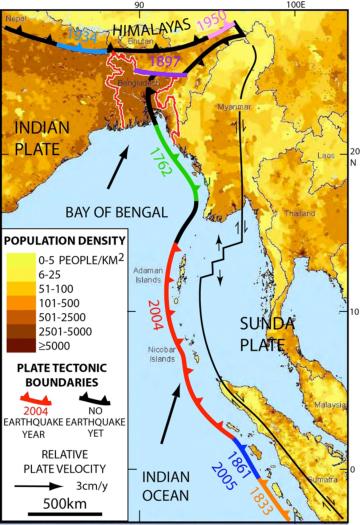 Bangladesh zemletryaseniya area is a continuation of the tectonic boundary, which caused a powerful underwater earthquake in the Indian ocean in 2004. The subduction zone under Bangladesh has a huge size (about 250 by 250 km) and is located just a few kilometers below the surface. Within it is located the city of Dhaka, which is home to more than 15 million people.

According to calculations, the voltage in this area is that in the case of releasing one of the plates jumped horizontally by 5.5 metres. If the pressure increases further, the shift can be up to 30 meters. In addition, the earth will move vertically and the Ganges and Brahmaputra rivers will overflow its banks and change its direction.

An earthquake can lead to liquefaction of the soil, which begin to suck the buildings, people and roads. The problem is complicated by the fact that Bangladesh is overpopulated. All natural gas fields, heavy industries and power plants are located near the potential epicenter of the earthquake, so probably I will be destroyed. Dhaka is likely to cease to exist.

Experts are unable to determine exactly when the disaster occurs, but confidently claim that it will happen sooner or later.