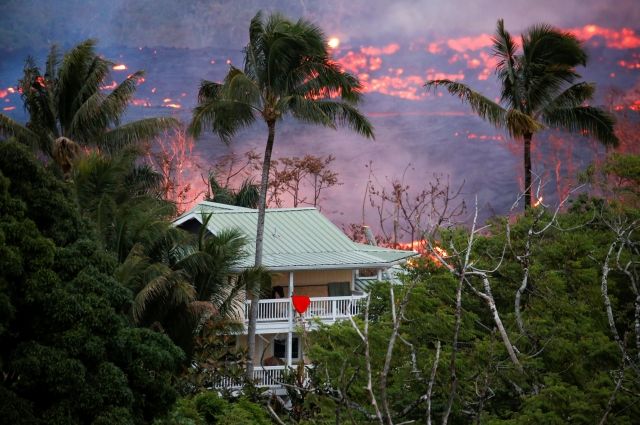 A resident of the village of Pahoa, located in the eastern part of the island of Hawaii, was seriously injured by the eruption of the volcano Kilauea. He was the first to seriously suffer as a result of the disaster, Reuters reported with reference to local authorities on Sunday.

“The local resident suffered from lava spray when he was sitting on the balcony of his house on the third floor,” the statement of the representative of the mayoralty of Janet Snyder County states. “Part of his foot is badly damaged.”

It is noted that at the moment there is a danger that the flow of lava will block one of the largest highways in the state, which is used to evacuate people. Local authorities are trying to clear another route for evacuation, which is blocked by hardened lava after the eruption of the volcano in 2014.

The eruption of Kilauea volcano began on May 3. It was accompanied by an earthquake of magnitude 6.9. The epicenter of the tremors was 25.5 km southwest of the special zone of Hawaiian Paradise Park (Pune County) with a population of just over 11,000. According to the US Geological Survey, the eruption of Kilauea volcano significantly increased on May 17. Because of the increased activity of the volcano, there is a threat of even more violent eruptions accompanied by explosions.

Governor of the State David Ige on May 9 announced the district of Pune, near which the volcano is located, a zone of natural disaster. On Tuesday, the island was declared the highest level of anxiety – red. US President Donald Trump granted a request for assistance to the island of Hawaii in connection with the consequences of the eruption of the volcano. In total, about 2 thousand people were evacuated from the zone affected by the impact of the elements.