A series of earthquakes occurred in Japan 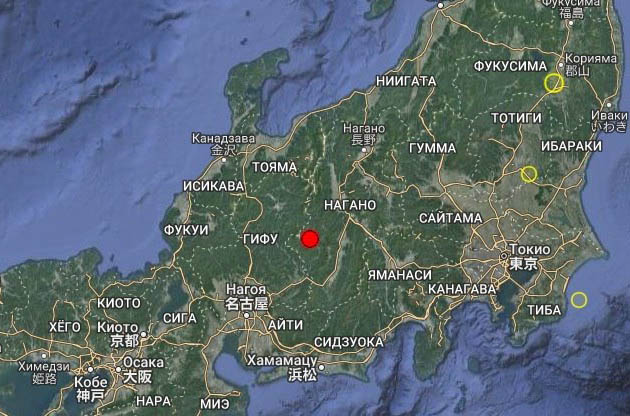 An earthquake of magnitude 5.7 occurred on the island of Honshu. The hearth lay at a depth of 10 km. The epicenter was located at a distance of 98 km from Nagoya. Subterranean tremors were felt in some prefectures of the country, including in Tokyo.

In the central part of Japan in Nagano Prefecture, aftershock of magnitude 4.4 occurred. Underground shocks were recorded at 09.24 local time (03.24 Moscow time). The earthquake occurred at a depth of 10 km.

Japanese seismologists warn of the possibility of landslides in the central prefecture of Nagano after the earthquake that occurred in the region of magnitude 5.7.

“The earth can be soft because of the rain, so you should monitor the possibility of landslides,” the NHK television channel quoted the words of the professor of Tohoku University Shinji Toda.

An earthquake with a magnitude of 5.7 occurred on Sunday morning in central Japan. According to the Main Meteorological Agency of the country, tremors were registered in 07.02 local time (01.02 Moscow time). The hearth of the earthquake lay at a shallow depth below the ground in Nagano Prefecture.

Jumps above 5 points on the Japanese scale were felt in 29 prefectures, including in Ishikawa, Gifu, Toyama, Kyoto, Osaka, Hyogo, Shizuoka and other prefectures. In Tokyo, the force of the shocks was about one point.