A tornado destroyed the village of Kuleshovka in Belarus 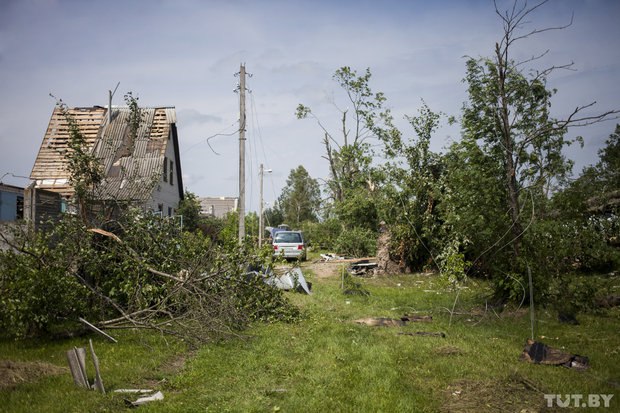 The village Kuleshovka suffered the most. Enter it and see that the entire street not a whole house. The fact that in the village nobody was hurt, local people call a miracle. 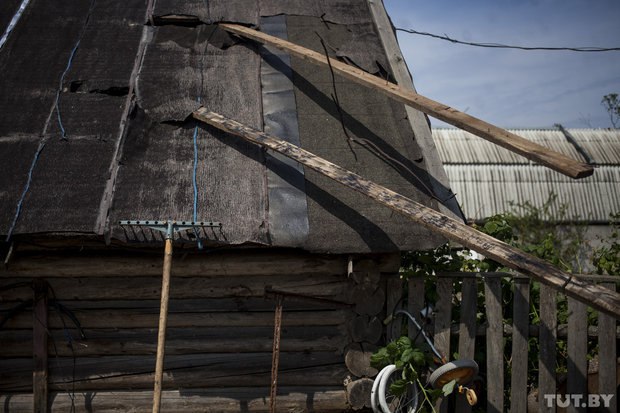 — It’s not just the horror happened, I have over 50 years of life never seen, — says the hostess of the affected house Elena. — I see these boards and slate? Is my roof. They drove into the ground… 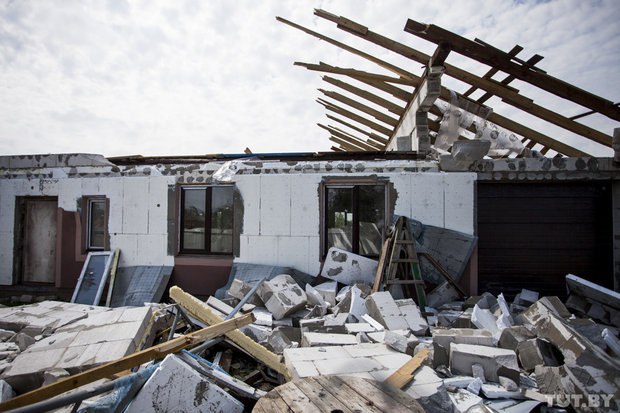 I don’t know what to call it. Water was knee-deep. It all started terribly: blue and white veil, the tops of the trees twisted like a mixer. These trees are 70 years old! Planted them after the war, and now with roots had’ve pulled. When it started, my husband hid in the cellar, how in time of war, honestly.

Pear, Apple, cherry, on the site of the woman knocked. A concrete fence just blew off.

— Concrete fence flew here on a neighbor’s garden. I never saw it. Just horror. It was a real tornado, like in the movies show. The tornado twisted here, then went to the left, and then returned. I from my window saw no fence, which is a meter away from the window. In the barn, pulled the door, and there other people’s things arrived, we all dig. In the garden now the wires are a power line was knocked down across the village. The light promised to give today. 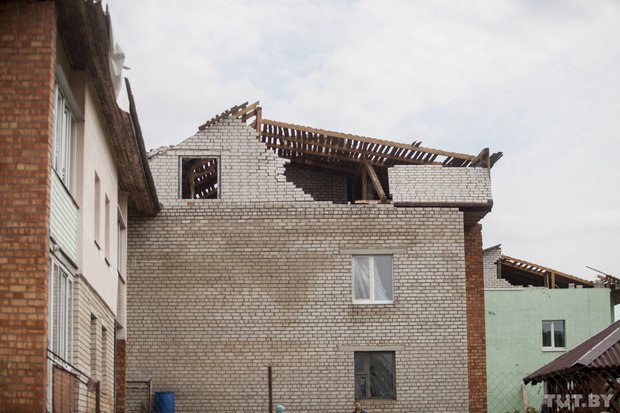 The village Executive Committee sent workers who help clear away the rubble. All affected houses walked around, looked at the damage later to make an assessment and help the host to recover.
And restore have a lot. Suffered in the village not only old houses and barns, but also brand new cottages. Neighbor Helena to build a house in time, and to live in it — no.

— For three years I built the house, he was ready. Just had to plaster the outside. And now nothing remains. Three years built — in three minutes, not that house, the village did not, ” says the owner and shows the blockages. The house is just jackknifed. The second floor seems as though it never happened. And red brand new tiles now all crumpled hanging on the remains of the fence.

To insure the house owners did not. What to do now, I don’t know.
— From the Executive Committee came, took pictures and left. Will help to restore, don’t know, ” sighs the man. — I will start all over again.

The neighbor’s house was also new. Built it recently and even managed to plaster the outside. Now part of the house is the dustbin, which was organized across from him, in order to carry planks and felled trees.

Another house on the street in which they live, retired, not much was hurt — but the slate was demolished in some places. But from sheds and baths there is nothing left.

It is noteworthy that the neighbouring village of Petrovichi was not injured at all. In Kuleshovka, Yes, and in the Petrovichi wonder how the hurricane passed them by.

— We have compared Kuleshovka all is well, — say the residents of Petrovichi. — The rain was strong, were all. Greenhouses took and crushed, and in some places the trees were knocked down. And saved us.
Over the Rhine starts in the village Zarechye. There are private homes more or less whole, but in two-storey buildings posnosil roof and part of the walls.

We were at home, when it all began, — the woman tells the apartment which is located on the second floor of the house. Is it was incredible. But the cellar or basement, we have no refuge in the rooms. When the wall was demolished and all the bricks inside fell on our ceiling, we are very afraid. What will happen now, don’t know. All the workers are in Kuleshovka, they say there is nothing of the village left. Then promised to come to us. The neighbors here called the crane clearing debris.

13 July due to the passing storm front with wind gusts up to 21 m/s injured 510 settlements in 26 districts of Vitebsk, Gomel, Grodno, Minsk, Mogilev regions and in Minsk, reports the Ministry of emergency situations of the Republic of Belarus. Damaged roofs 622 residential buildings, 13 community facilities, 6 89 industrial and agricultural buildings, collapsed two water towers in the villages of Natalyevsk of the Chervensky district and Pakalin Smolevichi district, Minsk region. 4250 fixed cases of falling of trees in Vitebsk, Minsk, Mogilev regions and in Minsk (3611 of the total number), of which 447 cases fall on the vehicle. For medical care in health institutions asked 36 people (7 of them were hospitalized).

On the territory of national airport “Minsk” aircraft damaged on the ground, there is damage to production buildings and ground support aircraft. As the result of rainfall in the form of rain in Minsk, Grodno and the Grodno area, as well as in Novogrudok Grodno region and reijnen Dzerzhinsk Minsk region were flooded 8 private yards, basements and 5 high-rise residential buildings, Grodno regional cardiological dispensary”.

In Minsk were flooded 45 road sections and recorded 28 stops of public transport (maximum time 1.5 hours). The vital infrastructure is not compromised. Due to disconnection of power supply pin of the lines was 26 stops the movement of trains. The delay time ranged from 15 minutes to 2 hours 35 minutes.

At 22:00, the movement of trains is restored in normal mode. According to the GPO “Belenergo”, in the period from 6:00 July 13 to 6:00 on July 14 in the territory of the Republic have been de-energized 1126 settlements, 141 agricultural building. According to the information at 6:00 on July 14, remain without electricity 187 settlements, 12 agricultural buildings.