Extreme cold in the Peruvian Andes 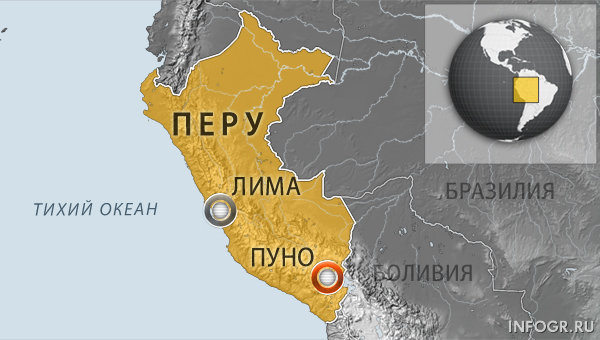 In the villages at a height of approximately 4.5 kilometers above sea level the temperature drops to minus 18 degrees Celsius.

[a resident of Arequipa]:
“Wake up and cook Breakfast for his nephews. Very cold”.

Often in such settlements is only one clinic, which is unable to cope with the influx of cases and shortage of medications.

[Soledad Ciampi, nurse]:
“Most of the children are sick, because it is very cold. They have bronchitis, which must be cured, and we go around the house.”

According to authorities, the cold weather threatens the welfare of about a quarter million residents of 12 regions of Peru.

From snow, winds, and frost began to die, and livestock, particularly young animals. The shepherds are worried that this is just the beginning.

[Francisco Curio, the Governor of San Antonio de Chuka]:
“Now the cattle weakened due to cold weather, and in September and October, he will die for lack of grass and winds that will begin later.”

According to the national Institute of civil defense, from the cold affected more than 10 thousand hectares of crops, including 120 hectares were completely destroyed. Also killed more than 33 thousand head of cattle.