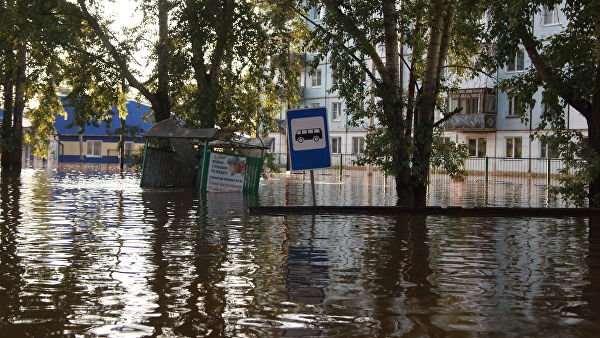 The abnormal development of atmospheric processes caused catastrophic floods in the Irkutsk region, found out at Irkutsk State University. In the foreseeable future, the situation may repeat. The number of flood victims, meanwhile, has grown to 18 people.

Specialists of the Irkutsk State University (ISU) named the causes of natural disasters in the region. According to the staff of the Department of Meteorology and Physics of Near-Earth Outer Space of the Geographical Faculty of the Educational Institution, the anomalous development of atmospheric processes led to flooding. Moreover, the probability of a repetition of the situation in the future is quite high, they sound the alarm in the ISU.
“The cause of catastrophic floods is the anomaly of the development of atmospheric processes, which appeared against the background of observed global and regional climate changes.
Under the influence of such processes, the territory of the Irkutsk Region turned out to be the most among the regions of Eurasia ”,
– said associate professor Inna Latysheva, whose words are quoted by the ISU website.

University staff conducted an analysis of synoptic maps and mesoscale models. In their opinion, a unique situation occurred in the western regions of the Irkutsk region – close interaction of three air masses: the Arctic, subtropical and extremely rare in the region, the removal of moist air from the Pacific Ocean at the heights of the lower and middle troposphere.

“I must say that these areas are also subject to flooding,” noted Latysheva. – It turned out that the period of maximum precipitation and the rise in the level of the rivers, and this is just June 25-26, coincided with the release of the first tropical cyclone of the hurricane season 2019, which determine the most intense heat and moisture flows from the oceans. This heat and moisture in the conditions of inhomogeneous topography manifested themselves in the development of clouds and the corresponding precipitation. Also note, if usually strong and prolonged precipitation in the summer in the Irkutsk region is caused by the passage of Mongolian cyclones, then
Another “culprit” of this situation was the cold cyclonic vortex.

It was formed on September 23 over Western Siberia, and then for a long time it was stationed in the south of the Irkutsk region, united with an extensive cyclonic depression in the east. ”

The specialist stressed that the probability of strong and prolonged precipitation in the Irkutsk region in the near future is determined as high. At the same time, the probability of dry periods also increases.
In turn, the scientific director of the Hydrometeorological Center of Russia, Roman Vilfand, described the situation analysis as “close to the truth” carried out by ISU staff, and he generally agreed with the experts’ forecasts.

“Extreme events have an increasing frequency, and the trend is increasing,” he told RBC. – We still do not know how the summer phase of the Pacific monsoon will behave. Usually its action begins to be felt in the second half of July. It was his intensive phase that led to the floods on the Amur in 2013. The recurrence of such events is once every 25-30 years, but they will become more frequent in conditions of climate warming. ”

The victims of the disaster in the Irkutsk region were at least 18 people.

Their bodies were sent for forensic examination to establish the causes of death. Another 13 residents of the affected areas are missing. According to the Emergency Situations Ministry of the region, the number of hospitalized due to the flood exceeded 190 people, almost 1.3 thousand people applied for medical help.

The worst situation was in 40,000 Tulun, where a large oil spill formed due to the flooding of several gas stations. According to Sergey Sokol, the speaker of the regional unit, it “can catch fire”.

“In total, 45 substations in the city went under the water – all of them need to be restored. Several brigades have been created, they are divided into sections, as they become free from water, they begin their work on returning lighting and electricity to all houses, but the timing of these works depends on how quickly the water leaves, ”- the mayor of Tulun Yuri Kariha.

Due to a sharp rise in the water level in the rivers Biryusa, Uda, Ut, Oia, Ikeika and Kirey, in the Nizhneudinsky, Taishet, Tulun, Chunsky, Zimin and Kuytun districts of the Irkutsk region, another 82 settlements were flooded. There are 43 socially significant objects in the disaster zone: these are feldsher-midwife centers, schools and kindergartens. The region has an emergency mode.