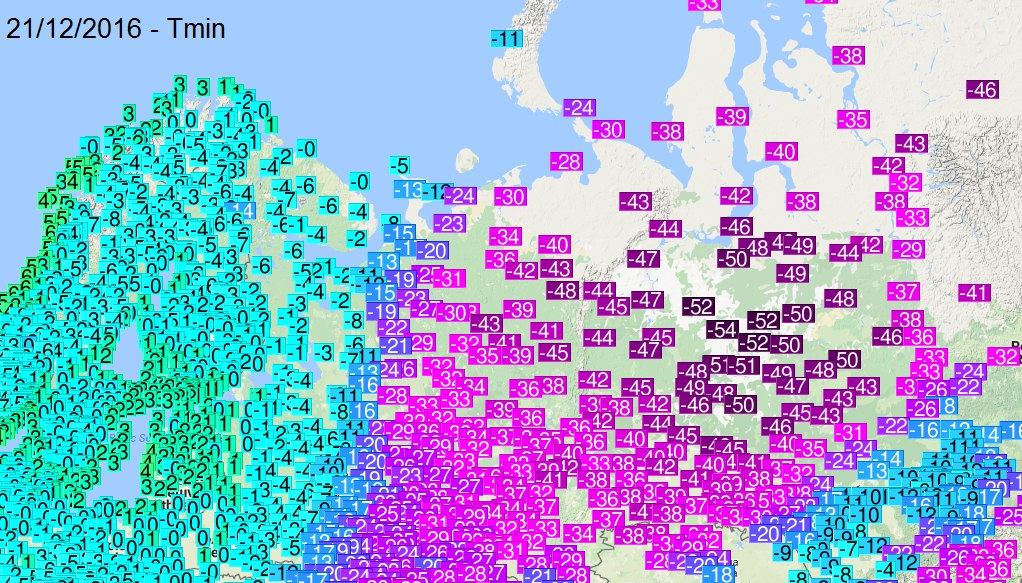 In Siberia for more than 3 weeks stored cold temperature anomaly. Moreover, if the first is the anomaly reached 10 degrees, now it is more than 20! Such frosts are dangerous weather events. Causes cold constant flow of icy Arctic air in the rear of the cyclone.

Today in Western Siberia, the weather will continue to determine the influence of the rear part of a cyclone, leaving in the centre of Krasnoyarsk territory, in places will pass a light snow, and frosts will become stronger.

The temperature anomaly reaches 12 degrees to the North and the South of the region and 24 degrees in the center of Western Siberia.

On the Yamal Peninsula is expected, light snow, freezing fog, upcoming night at at times to -55 tomorrow afternoon..-39 -44, sometimes up to -50 degrees. In the Khanty-Mansi area today, light snow, mist, fog, day -42 -47.., sometimes..-32 -37. The normal average temperature for December in this district is -16.8, to date, the temperature of the month, according to observations made -26.1, thus a deviation from the norm has already exceeded 9 degrees.

In the South region to anomalous frosts added to the snowfall and strong wind. In the South-Eastern areas of Western Siberia small, in some areas of moderate snow, Blizzard, in the Altai region sometimes heavy snow in the Kemerovo region, wind gusts up to 25-27 m/s, in the Tomsk region they reach 16 m/s.

Below minus 60 degrees Celsius fell on Wednesday, the air temperature on the territory of Khanty-Mansi Autonomous district, have informed in regional Department of public and external relations.

“Anomalous cold in minus 62 degrees recorded on Wednesday in Beloyarsk district, the field is Large olchowski,” — said the Director of the Department of public and external relations HMAO Elena Shumakov.