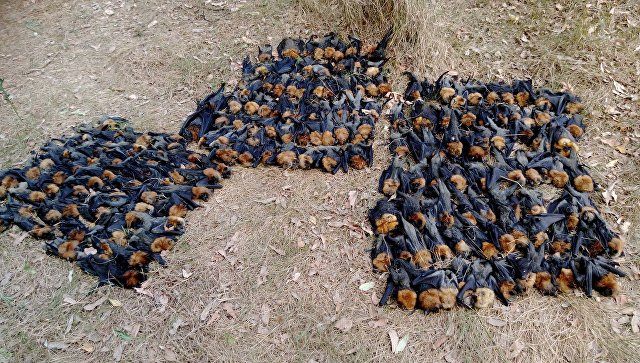 The most powerful waves of heat, which struck Australia this week, began to kill hundreds and thousands of bats, causing overheating of their brain and other vital organs.

“It’s possible to say that bats are” brewed “in the air under such conditions, at a temperature of 44 degrees Celsius, their brain is literally boiling-they lose control over themselves and can not normally navigate in space,” said Kate Ryan ), an ecologist from the city of Campbelltown, whose words are broadcast by LiveScience.

One of the consequences of global warming is the so-called “extreme weather events” – periods of abnormal heat in winter or cold in summer, heat waves, weekly heavy rains, droughts and other phenomena associated with “wrong” weather. For example, the flood in Krymsk in 2012 and the summer heat in Russia in 2010 are today considered to be one of the most striking examples of such phenomena.

As noted by the Russian academician Igor Mokhov, the frequency of similar phenomena in the future will only grow as the global warming progresses, and they will cover all the larger territories. This will lead, as calculations of western climatologists show, to a sharp increase in mortality – every “extra” degree of heat in the summer will increase the number of dead people by 5%.

The first consequences of this phenomenon residents of Australia were able to observe last weekend, when the most part of the country was the next wave of summer heat. Air temperatures in the central and southern parts of the continent rose to a mark of 40-44 degrees Celsius, which led to the mass death of gray-headed volatile foxes (Pteropus poliocephalus) – Australia’s largest bats listed in the Red Book.

These bats, unlike most of the congeners of temperate latitudes, live and spend the night on the branches of trees, whose fruits they feed, not in caves, which prevents them from escaping overheating and the sun’s rays. Record high temperatures prevailing in Australia in the last three days, as the ecologist notes, had a very negative impact on the condition of the colonies of Pteropus poliocephalus and many other bats.

According to Ryan, only in the vicinity of Camlllltown, ecologists and locals found thousands of bodies of bats who were already dead or almost dead from heat shock, about two hundred of whom died during unsuccessful attempts to save them. Especially badly affected young individuals, deprived of the ability to control the temperature of the body.

In the coming days, as environmentalists expect, the heat wave will subside, but by that time even more bats are “cooked” live. Repeated periods of abnormally high temperatures can put flying foxes from Cambelltown and other Australian regions in jeopardy of extinction, concludes Ryan.