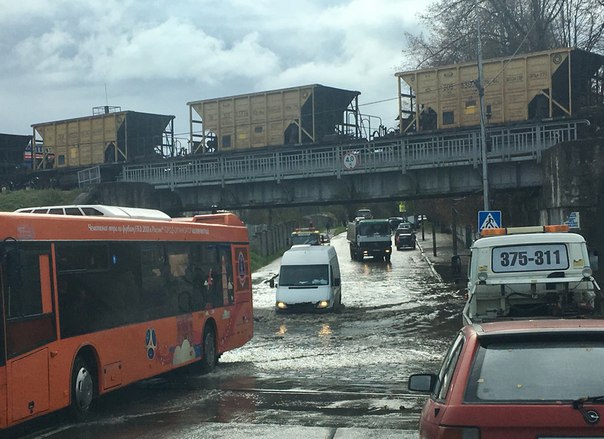 Flights, whose departure from Kaliningrad on Sunday was delayed due to unfavorable weather conditions, were sent to the airport of destination. But in Kaliningrad the storm warning continues to operate. To showers added a strong wind speed of 25 meters per second. The region is flooded with rain: over the past day, more than a third of the monthly rainfall rate has fallen.

The car swings on the waves like a sailboat. The car stalled right in the middle of the puddle, along which the owner of the car walks, despite the fact that there are no rubber boots. Now for him the most important thing is to get the car out of the water. Nearby four cars with raised hoods, they have already been taken out of the puddle and are now dried.

On the other street of the city, Shipbuilding, water is not less. Due to the fact that the road is narrow, it does not do without an accident. Natalia Khaleeva went home, where she was waiting for two young children. But she will not come to them soon – because of the accident. “I was traveling on my own strip, and he started straightening out straight ahead,” says Natalia, “he says that now there is no strip there, just the sea-how we want to go and how to drive.”

Heavy rains flooded not only roads, but also apartment houses. You can not go into the house on Krasnokamennaya Street without high boots. The height of the puddle is more than 30 centimeters, but there are deeper plots. According to local residents, the yard turns into a “Venice” after every seasonal downpours, but this is the first time a flood of such magnitude.

I went under the water and the first floor of one of the houses. With the advent of the “private pool”, heating and hot water disappeared from the apartment. It is impossible even to cook a hot dinner – for the sake of security tenants had to disconnect from the network almost all household appliances. Local residents have repeatedly applied to special services, but they have not received any help.

During the seasonal rains the house in Krasnokamennaya Street resembles an island. The only way to land is wooden pallets and boards. “It’s already on the fourth step, we just jump,” says Elena Abramova, a resident of the house on Krasnokamennaya Street. “I could not get home at all yesterday, I had to take everything off, go barefoot to my house, take my boots and go to another place to put the car” .

Now locals are trying to pump out at least part of the water with a motor pump. People hope that they will wait for help before the frosts come and the lake will turn into an ice rink.