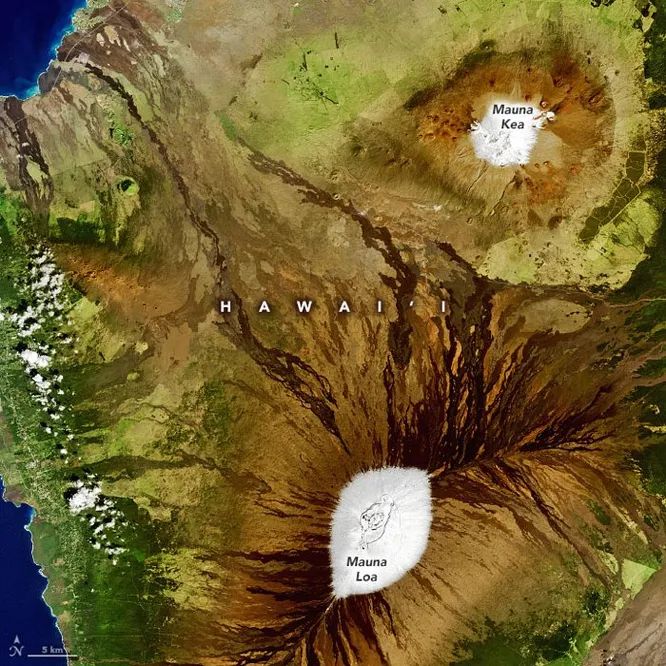 Thanks to NASA satellite, scientists were able to study the tops of Hawaiian volcanoes, covered with an abnormal amount of snow

A high-resolution image captured on February 6 with the Operational Land Imager (OLI) aboard the Landsat-8 satellite shows a striking contrast between the snow-capped peaks of Mauna Kea and Mauna Loa and the surrounding volcanic rock. OLI is a joint venture between NASA and the US Geological Survey to study geological processes from space.

Snow and Hawaii may sound like an oxymoron, but there is quite a lot of frozen rainfall in Hawaii. According to scientists, the volcanic peaks of the dormant Mauna Kea and the active Mauna Loa (both at more than 4,200 meters above sea level, while Mauna Kea is only 38 meters higher) are covered with at least frost every year – but there is usually very little snow …

However, this year, severe storms have covered the summits with snow three times since 18 January, leading to their second largest snow cover since records began in 2000.

Haleakala, an active volcano on the island of Maui, which has not erupted for about 400 years and whose height is about 3000 meters, also received a snow cap that is rare for these places on February 3 – however, it quickly melted.

According to Weatherboy, residents of the Big Isle enjoyed the snow, swapping their surfboards for snowboards to do a ride on what they call “pineapple powder” before it disappeared.

Snow in Hawaii occurs as a result of a significant change in wind direction as a result of a local weather event known as “Kona Low”, a Polynesian term that translates to “leeward storm.” During this phenomenon, cyclones caused by low pressure systems north of the islands change the direction of the normal northeast trade winds to the southwest.

This draws water from the Pacific Ocean into storm clouds that sweep over the islands. During this time, cold air passes through the islands, which reduces the temperature at the peaks below zero and causes snow to fall; the same precipitation falls as rain on the rest of the island.