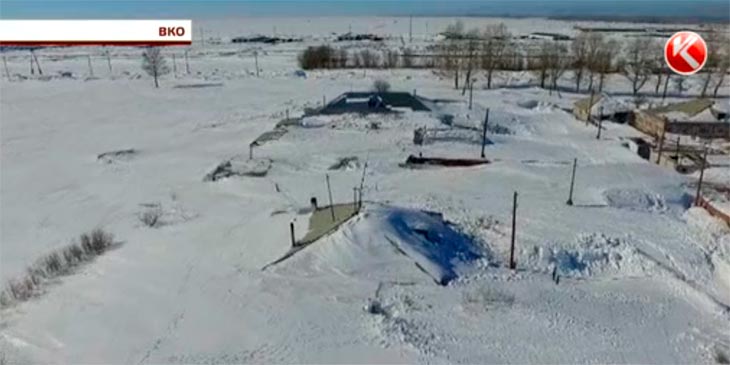 In the village of East riverside residents are forced to dig tunnels to get out of their homes. The settlement of piled snow. People are asking for help: the roof here-here will start to crumble. Fear the villagers and the upcoming warming: if all the snow abruptly melted, the village will go under water.

The street October this year was filled with snow. To go out, people are digging this hole. Locals ask officials to help. At least clear the street.

Dozens of houses in the village Prirechnoe are hidden under a thick layer of snow. The roof, seems that can collapse. Helen Bourne home goes through a hole in the snow, which struck with a shovel. Window buried under a tough crust. Because of this, the lights in the house have to include both night and day.

Helen Bourne, a resident of the village Prirechnoe SAIs:

If I, God forbid, there will be a sharp warming, we are afraid they may be left without housing… People come into the tunnels. Starts water, the roof breaks. I don’t know what we can do.

Are in this situation and neighbors from 20 yards. All trying to get each other to the rescue. Get together and dig from under the snow the other villagers, locked in houses. But the snow crust is very difficult to break. The cattle sheds and other buildings also under the snow. People are trying to save housing. Remove snow have nowhere to go. Even to drive to the courts impossible.

Here after the storm the car. Here can’t find her anywhere else. Blown the Windows clean. Scary.

Snowdrifts reach the wires! To clear alone the street, the villagers say, can neither physically nor financially. Fear for kids going to school so they do not fall from the snowy mountains and crashed.

– Look, there’s a wire there. The kids play!

People walked everywhere. Wrote to the city administration. But the results so far. Officials at the exit, say that you do problem and please do not panic.

The money is allocated – a huge sum for this October street. Million one hundred forty-five thousand. As the contest will be held, clean.

But most of all the residents of Riverine afraid of the arrival of spring. People have dealt with floods. But this year the winter was snowy as ever.