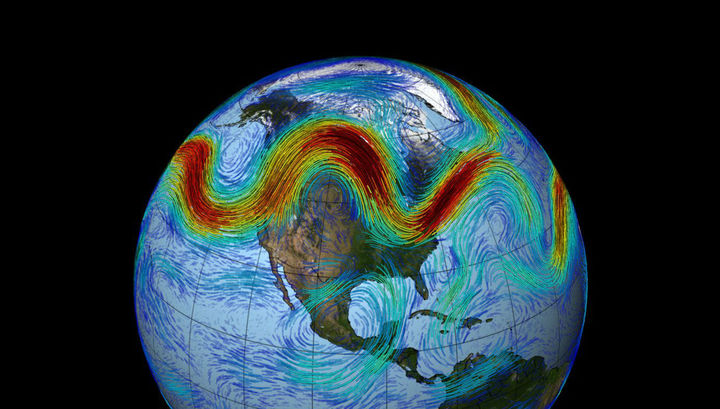 Yes, weather forecasters often make mistakes. But there are such weather anomalies that can not be predicted in advance, for example, because of a lack of knowledge about certain phenomena in the Earth’s atmosphere. The European heat in 2003, the drought in California in 2014, the super-hurricane Sandy in 2012 – all these catastrophic events that took many human lives, were triggered by the phenomenon of blockage of jet streams. But until now, scientists could not find a convincing way to explain what was happening.

The jet streams were first discovered by the meteorologist at the University of Chicago, Carl Rossby, in the first half of the twentieth century. This term means narrow streams of strong wind (an average of 45-50 meters per second) in the upper troposphere and the lower stratosphere, having a rather complex structure in the horizontal and vertical directions. Almost simultaneously with the discovery of jet streams it became known that they can very sharply “slow down”.

And finally, geophysicist Noboru Nakamura and his graduate student Clare Huang connected the events in a single whole. It is interesting that the solution of the problem was a mathematical model describing a kind of formation of a traffic jam on a high-speed multi-lane highway.

One of the problems in describing the process of “braking” was the selection of parameters that would most accurately characterize the motion of air masses. The authors of the new work had to add a few parameters not previously used, in particular, the meander, that is, the degree of tortuosity of the jet stream. (A similar characteristic is usually used when describing the river bed.)

Returning to the analogy with road traffic, the researchers found the throughput of air masses in the jet stream. It is obvious that when the threshold value of this indicator is exceeded, the flow rate decreases. A similar effect occurs when a number of air “highways” merge.

In a university press release, scientists note that their unexpectedly simple model not only explains the blockage of jet streams, but also gives a long-awaited opportunity to predict it. Moreover, we are talking about short-term weather forecasting, as well as models of long-term behavior of air masses in regions that are prone to frequent droughts or floods.
“This is one of the most unexpected moments of enlightenment in my career as a scientist, truly, a gift from God,” says Nakamura, “it’s very difficult to predict something until you understand why this is happening, which is why our model should be extremely useful.”

It is important that the new model, unlike most modern climate calculations, was simple in terms of calculations. At the same time, the authors note that, when using it, it is worth taking a close look at the meteorological features of a particular region. In particular, in the Pacific Ocean, “air jams” can be resolved for decades.

More details about the achievements of the Chicago geophysicists can be found by reading their article published in the publication Science.