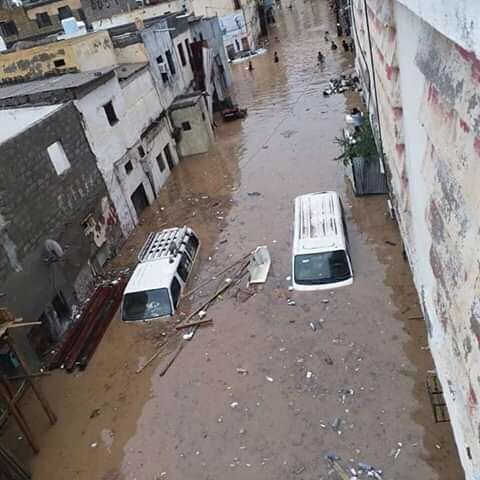 The Yemeni government declared the port city of Aden a disaster zone on April 22, 2020, after devastating flash floods caused by up to 125 mm of rain in just 24 hours. On average, the city receives only about 5 mm of rain in April and about 37 mm throughout the year. Floods destroyed buildings, affecting thousands of people and killing at least 10 people.

The streets turned into raging rivers when water washed away vehicles, leaving significant damage to property and infrastructure. Flooding flooded the temporary shelters of families already affected after they were displaced by the conflict in the country.

Residents fear an outbreak during the rainy season, in the context of the ongoing civil war, which damaged more than half of the country’s medical facilities and disabled most of the clean water sources.

At least 10 people were killed and another 30 were injured in various parts of Aden. One official said that two of the dead were in the Al Muallah area, and five more were in the city of Syrah.

Among the victims were three children from the same family who died when their house collapsed. Affected residents were taken to nearby medical centers for treatment.

Video:- The devastating floods in Aden, Yemen.
We hope and pray #Covid19 will be the only disaster. @HarunMaruf. pic.twitter.com/F0TPyKjClU

Will we sleep today in the street? A woman of two children in #Aden is crying for help after her house is swept away in flood . #YemenCantWait #Yemen pic.twitter.com/pXVDP2Pusb

Aden is sinking.
Our thoughts and prayers for the people of #Aden, #Yemen. pic.twitter.com/nW0DtViMQk