An earthquake of magnitude 5.6 occurred in Taiwan 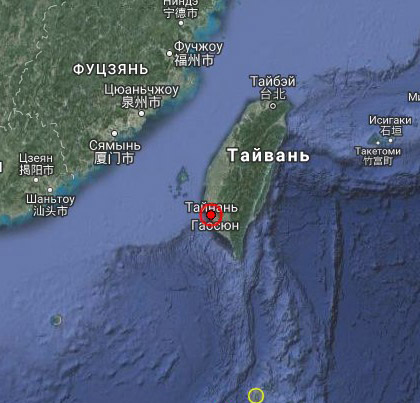 An earthquake of magnitude 5.6 occurred in Taiwan. The focus lies at a depth of 18 km. the Epicenter was located at a distance of 11 km from Tainan city. More than 50 thousand families were temporarily left without electricity.

Tremors recorded in 01.12 local time on Saturday 11 kilometres South-West of Tainan city. The focus lies at a depth of 18 kilometers. After this was recorded two aftershocks of magnitude 4.2.

The earthquake disconnected two substations, of which 50.9 thousand families remained without power. Soon, however, teams of electricians managed to restore the electricity supply.

In addition, in some areas of the city were disturbed water, in buildings of stuck elevators in some rooms the ceiling was falling tile. Four people were injured in the earthquake.

According to authorities, one person was injured in Tainan, three in the neighboring city of Kaohsiung. They were all taken to the hospital, but the severity of their injuries was not specified.

According to the Director of the Central meteorological Bureau of Taiwan Blue Tsitsina, in the next two weeks and could lead to more aftershock of various magnitudes.