An earthquake of magnitude 6.4 occurred in California. After the main shock, hundreds of aftershocks were recorded

An earthquake of magnitude 6.4 occurred in California. After the main shock, California is shaken by dozens of earthquakes. The number of aftershocks has already reached 153 only today – July 5, the magnitude of which ranges from 2 to 4.6 on the Richter scale.

The epicenter of the most powerful underground tolchkazalelegal at a depth of 10.7 km in the area of ​​San Bernardino district. The US Geological Survey warned that in the coming days there is a 50% chance of a new strong earthquake.

The Kern County Fire Service, where the earthquake epicenter was located, reports that the local hospital Ridzhkrest Regional was evacuated. The mayor of Ridgecrest Peggy Briden reported that five fires had occurred in the city due to gas breakthroughs.

According to the emergency services, as a result of the earthquake, cracks appeared in the buildings, the water supply system was damaged, power lines were torn off, and there were landslides on some roads in the north-western San Bernardino district.

This is the strongest earthquake in Southern California in the last 20 years. 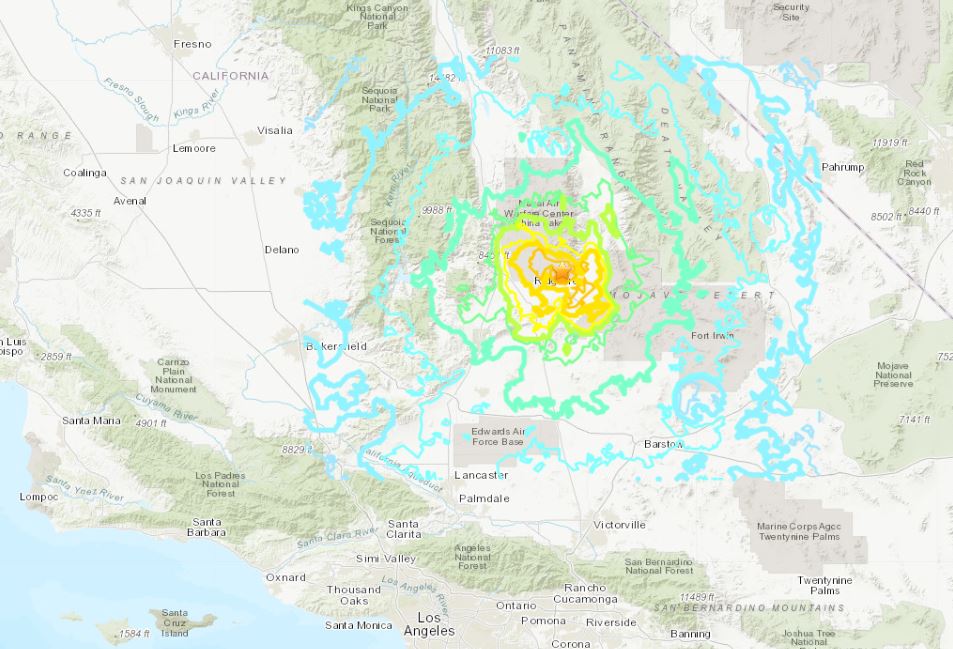 #Earthquake Detection: The @PNSN1 Gold Mtn. seismometer near Bremerton is very sensitive. It detected last night’s M6.2 off the B.C. coast and this morning’s M6.4 in Southern California. pic.twitter.com/ENYMLYzw0f

M6.4 #earthquake in #California about an hour ago with numerous aftershocks since. #californiaearthquake pic.twitter.com/9vzN2xymLb

Fault details for the area around the M6.4 California earthquake from Stevens et al. (2013). Approximate location of quake given by star. Little Lake fault is currently mentioned as likely source but other faults appear as (maybe more likely?) candidates. pic.twitter.com/zkFWyTk4X8

My dads liquor store in Ridgecrest (11 miles from the earthquake) 🥴 pic.twitter.com/4RC0mY3eha

More Than 40 Recorded Aftershocks After The Initial M6.4 #Earthquake

WATCH: Mahogany Rose, a Northridge, California, resident, shared video of the M6.4 earthquake in her neighborhood: rolling waves in her pool.

Seismologists say aftershocks from the earthquake are ongoing, and we should be expecting more aftershocks >>> https://t.co/Um1lQD0zMc pic.twitter.com/KN9CrJ13z2

#BREAKING: Following M6.4 #earthquake in SoCal, a tsunami is not expected, NWS says, per @NBCNews. https://t.co/zvkhFr2SvM