An earthquake of magnitude 7.4 occurred off the coast of Japan 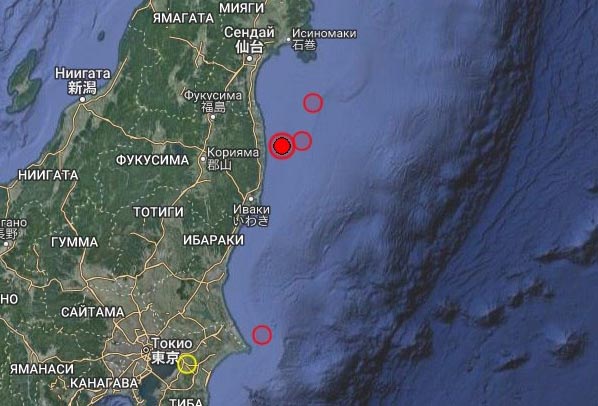 An earthquake of magnitude 7.4 occurred off the coast of Honshu island at 23.59 GMT time. The focus lies at a depth of 11 km. the Epicenter was located at a distance of 37 km from us. item Name and 105 km from the city of Sendai. Later, the magnitude of the earthquake was downgraded to 6.9 on the Richter scale.

Tremors were felt in many of the country’s prefectures, including Tokyo. The height of the tsunami after the earthquake, a number of us. points, reached 60-90 cm Maximum tsunami height of 1 meter 40 centimeters was recorded at the port of Sendai.

Some residents of coastal areas were encouraged to evacuate to safer places at higher elevations. Information about major destruction, victims and the victims have to date not been reported. Several people received minor injuries, they were provided with medical care.

After the first, the most powerful quake in the same area there have been several aftershocks, the magnitude of one of them was 5.6. The Japanese authorities warned the population about the possibility of a new strong earthquake for the current week.

EMERCOM of the Russian Federation monitors the development of the situation after a strong earthquake in Japan that occurred on Tuesday morning.

We continue to actively monitor the development of this situation. At work we have more than 300 posts are monitoring the radiation situation, – said the Deputy head of the far Eastern regional center of EMERCOM of Russia on crisis management Vitaly Darchia.

According to him, after the earthquake tested the warning system a tsunami.

Was also tested all systems of the emergency notification of the population about the threat of a tsunami. All in good condition. Monitoring continues, – said V. Darchia.

The Japanese government warns that within a week it is possible to repeat the strong earthquake and tsunami.

As specified, should be ready for the new underground push force of 5 points on the Japanese seven-point scale and a tsunami.