An unprecedented invasion of crocodiles in India 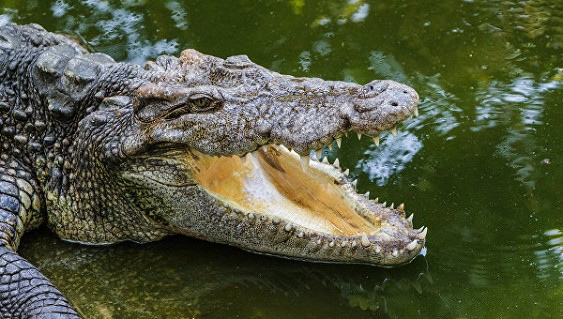 An unprecedented invasion of the crocodiles observed due to the flooding and flooding of the banks of the Ganges in Uttar Pradesh in Northern India.

Just a week in low-lying residential areas of the County Mithapur was discovered eight crocodiles.

The last major Ghanaian gavial length of about three meters was defused by a team of Rangers and police in the village of Cakraz last morning. One of the local residents, going for milk at the nearest shop I saw in his yard a huge reptile. The woman called for help neighbors, and those addressed in forest protection.

Crocodile was able to bind and pull to the river, and then, cutting the rope, releasing it into the water. As noted by the representative of the forest Department, the operation was quite difficult – a crocodile of this size is dangerous and associate it was only with the help of local residents who are not afraid to take part in the catching of a predator.

The gharials can reach up to six meters in length and weigh up to 200 kg. meanwhile, according to environmentalists, with all their terrible and impressive dimensions of these reptiles – a strong supporter of fish diet and therefore usually pose no danger to people and livestock. All crocodiles they spend most of their time in water, coming on land only to bask or lay eggs. In India and Nepal these reptiles is considered sacred, and hunting them is strictly prohibited.