Anthrax on the Yamal Peninsula 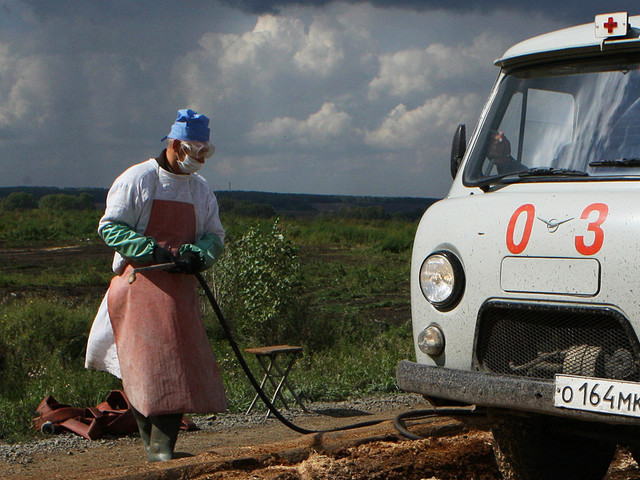 The number of hospitalizations from the anthrax on the Yamal Peninsula increased from nine to 13 people, mostly children, according to local authorities.

“In Salekhard hospital for further tests and observations have taken four of the tundra of the Yamal tundra” – quoted TASS the press service of the Governor of the region Dmitry Kobylkin.

“The medical staff conducts proactive treatment and expects the final analyses of experts from Moscow. In parallel, children carry out routine screening for the presence of other diseases,” – said the Agency.

It is noted that the representatives of the government of Yamalo-Nenets Autonomous district health Department are in constant contact with the Ministry of health of the Russian Federation and relevant Federal agencies.

At the moment, in the place of the hearth are over 20 different specialists, the emergency aircraft is on duty around the clock. “At a distance of 80 km from the place already deployed six 10-person tents out of the material reserves of the Yamal-Nenets Autonomous district in case of emergency. Safe helicopter transport, primarily women and children. To stay to help veterinarians and health experts expressed the intention of some of the heads of nomadic families – no more than 10 people”, – said the press service.

It is also reported that on Monday a vaccine against anthrax were vaccinated 500 deer. “Today (to work specialists will be until late at night) will be vaccinated 2.5 thousand tomorrow, 27 July – 1 thousand heads. Vaccination is carried out in a portable corral, which was delivered to the village by helicopter the day before”, – said the press service. In addition, preparing places for disposing of the fallen deer.

Flash Siberian advisoryservice on the Yamal Peninsula for the first time in 75 years. Today it has killed more than 1.5 thousand reindeer. In the Yamal district has been quarantined, the authorities claim that threats to the population there.

According to preliminary data of the authorities, the cause of the infection of deer was unusually warm summers. During the month on the Yamal Peninsula held heat waves up to 35 degrees above zero. “Thawed tundra contributed to the manifestation of the source of infection – the remains of the fallen once upon a time animal – the website of the Governor YANAO. – Deer, in this place, was extremely weak because of the heat that contributed to their contamination.

According to Rosselkhoznadzor, Russia registered sporadic cases of animals with anthrax: detected every year two or three affected with a disease of the point and from two to seven sick animals. In the period from 2009 to 2014, the country registered 40 cases of human infection with anthrax (43% more than in the previous five years) in three Federal districts: 20 – in the North Caucasus, 11 – in the Siberian and nine in the South.

In 2015, the three residents of the Balashov district of the Saratov region was the diagnosis “the Siberian ulcer”. It turned out that all three participated in the slaughter of a bull.

Anthrax – especially dangerous infectious disease of agricultural and wild animals of all kinds, and also humans. The source of infection are wild and domestic animals, from person to person disease is not transmitted.

Infection occurs by contact, the incubation period of the disease lasts on average three to five days. The disease progresses at lightning speed, is characterized by a hemorrhagic inflammation of the skin, lymph nodes and internal organs.