Apple production drops 50 percent, farmers in Jammu and Kashmir on the brink of bankruptcy 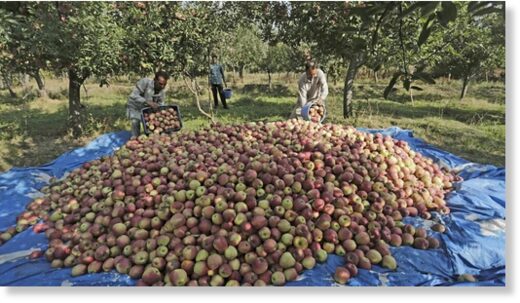 Travel agent Mumtaz Ahmad, 42, has poured his savings into the horticulture sector, hoping to recoup losses incurred by the tourism business over the past year.

Although he buys high-priced pesticides and hires highly skilled workers to care for his apple orchards, he is struggling to break even as adverse weather and disease combined hit the horticultural sector hard.

“This year scab has hit the apple harvest. production, which was expected to reach an all-time high, has been cut in half. This will be the worst year for apple producers, ”he said.

For the second year in a row, farmers have suffered huge losses due to disease and a drop in production due to poor quality pesticides.

After the failure of tourism, people pinned their hopes on gardening and agriculture. However, this year the horticulture industry also collapsed, and as a result, producers were on the verge of bankruptcy.

“Gardening is in decline and growers have gone bankrupt due to last year’s lockdown. Annual production has almost halved, ”said Fayaz Ahmad Malik, president of the North Kashmir Apple Association.

Horticulture is the backbone of the economy of Jammu and Kashmir. Its contribution to the GDP of Jammu and Kashmir is about 8 percent. Official figures show that seven thousand families are directly or indirectly involved in and dependent on gardening.

At Asia’s largest Fruit Mandi in Sopor, only 200 trucks of apples and pears are sent to foreign markets, up from 300 trucks a day last year.

“Last year we got a large number of dealers from Bangladesh and other states. Due to the blockage, counterfeit pesticides have flooded the valley’s markets that have not been able to handle the scab, ”Malik said.

Parmipora Fruit Mandi Srinagar is also in decline. This year, apple exports have dropped by more than 300 percent.

“Out of 400 trucks, only 150 leave for New Delhi and Amritsar. Last year’s losses hit dealers who were unable to buy more apples this season. The flow of pears to this market was almost 20 percent less than the previous year, ”said Bashir Ahmad Bashir, President of Parimpora Fruit Mandi.