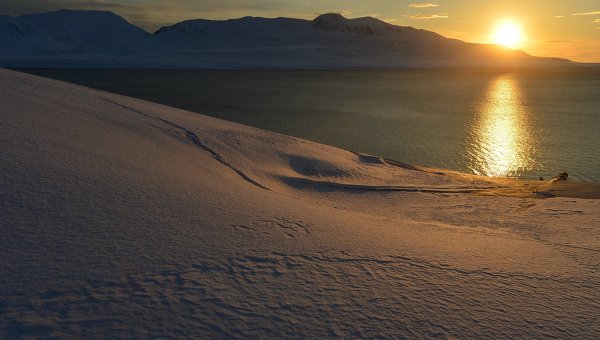 Visa coast of the island in the Kara sea due to climate change collapses with great speed, for the last seven years it retreated more than 70 meters, which can be considered a world record, according to the world wildlife Fund (WWF) Russia.

The shore of the island Wiese had previously destroyed, it is a natural process. However, if in the 50-ies of the last century explorers observed the average rate of retreat of the coast in the year of 1.5 meters, on satellite images from 2009 to 2016 the shore retreated in this place, at 74 meters. The speed increase is impressive, ” says glaciologist Alexander Aleynikov, who made this discovery during the preparation of the materials to create the Federal reserve on the island Wiese.

As the Fund, such rapid changes are associated primarily with erosion of the sea shores, which are composed of permafrost rocks. And wave action is directly related to the number of days in the summer season, when round the island there is open water, clear from ice. Analysis of Landsat space images for last year showed an increase in the period of open water, associated with a warmer climate. So, on the satellite image from July 15, 2016 can be seen that the floating ice in the waters of the island Wiese is completely absent.

Previously it was thought that the greatest rate of destruction of banks in Russia and in the world at the Novosibirsk Islands, which depart sometimes in 5-15 meters, sometimes on 20 meters after one heavy storm. Likely that the island is Visa, the rate of destruction of the banks, even higher. It is necessary to continue observation, ” said program coordinator -Climate and energy – WWF Russia Oksana Lipka.

As reminds Fund, the warming in the Arctic is approximately two times faster than the average on Earth, which opens up new prospects for its development. Will be actively used the Northern sea route, the route will move North as the ice in the ocean will be smaller, will be more active minerals, will build new facilities, develop infrastructure.

Now it is necessary to preserve the most valuable natural areas, which will play an important role in the conservation of biological diversity in the Kara sea during its economic development. Vize island, as well as the nearby island of Ushakov is a key permanent habitat of the polar bear and Atlantic walrus in the Russian Arctic. It is important as soon as possible to complete the work on creation of the integrated nature reserve — believe in WWF.