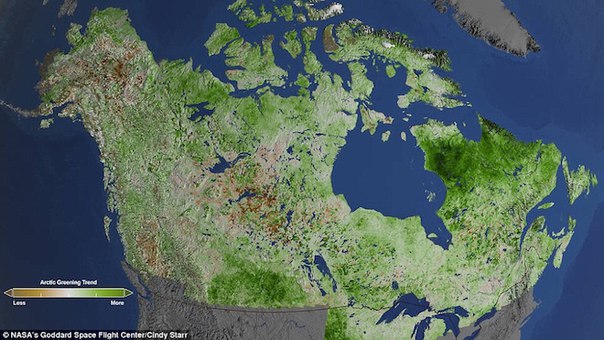 Once frozen Arctic tundra of North America is now in bloom, showing a new NASA photo. The researchers analyzed 87 thousand photos taken from 1984 to 2012 satellites “Landsat”, and found that the Northern continent is very green.

It turned out that one-third of the region (much of which is Arctic tundra) can look like the landscapes of warmer ecosystems. The temperature in the Arctic rising faster than anywhere else on the planet. As a result, the period when plants can grow, became longer and changed the soil.

The scientists saw how the tundra turned into the bushes, and bushes became more and more dense. The strongest observed greening in the tundra in Western Alaska, on the North shore of Canada and in the tundra in Quebec and Labrador.

Overall, scientists have found that green 29,4 % of the region, especially in areas covered with bushes, and regions with sparse vegetation. 2.9% of the territory of the observed decline in vegetation.